Not only tyrannical Mahinda but even his corrupt minions in the queue will not get nominations : President Maithri re -confirms! 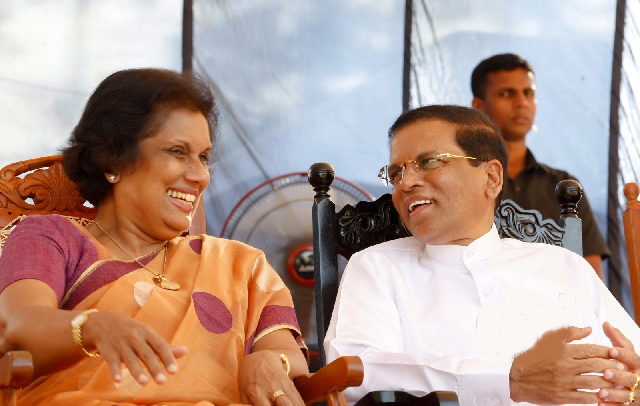 (Lanka-e-News- 05.July.2015, 11.30PM) President Maithripala re affirmed and re confirmed that Medamulana Percy Mahendra Rajapakse who only deserves an ignominious  place in the Guinness book of records as the worst liar and tyrannical ruler in the world responsible to disgrace and degrade  the country on an unprecedented level will not be granted nominations . Even those minions who are propping and prodding him  will not get nominations , said President Maithripala who was steered to victory on the 8 th of January  by the people who risked their lives to accomplish that for Maithripala and elect a government of good governance. It is a pity even  now the deposed people discarded ex president who is considered by one and all as fast gravitating towards the grave and a spent force is  despite his  acute senile decay mentally and physically is engaging in most treacherous manipulations to  wrest nominations from president Maithripala.

The president gave this unequivocal confirmation when he met with the leaders of the people’s forces today (noon) who were ready to sacrifice their lives to earn him victory on 8 th January.. The president  met with these patriotic forces at a venue that cannot be disclosed.(Names of the leaders who participated shall be revealed later )

Following a lengthy discussion , the president has stated in no uncertain terms that not only Mahinda , even those minions who are queued up behind him , the notorious corrupt crooked scoundrels who were responsible to devastate the SLFP party will not be given nominations.’ ‘Even if my hand is  severed I shall not grant nominations to the corrupt’ were the words used by the president.

are the corrupt politicos who will not be getting nominations under SLFP.

It is significant to note that Susil Premajayantha the UPFA general secretary , even though is a bootlicking shameless stooge of the  Rajapakses , he has no powers to sign for the nominations alone.In the circumstances , his statement yesterday that all the parliamentarians will be given nominations is based on his day dream.

Desperate and dejected  Mahinda who got wind of this is now frantically seeking to take refuge in Dinesh’s MEP party and its symbol , the wheel , or Wimal Weerawansa’s NFF party and its ‘panchayudha’ symbol . He is now having discussions on this.

At the same time , according to the memorandum of understanding signed between president Maithripala and Ranil Wickremesinghe , anybody who is not granted nomination under  the SLFP will not be given nomination under the UNP too. In any case , the UNP executive committee  and Ranil Wickremesinghe have already decided that nominations shall not be granted to politicos facing charges of corruption.

6.2 million people rallied together to bring about a decisive  change in the country successfully .Today this number has risen phenomenally – not diminished.It is the people’s apirations and cherished aim that the  government shall be anti corrupt , development and good governance prone . No mafia boss , no godfather , no selfish  opportunistic or thug of a ruler  can oppose this force.

5 discussion on this news

The President should address the nation and tell the truth 62 m people do not know what is happening....he also should be neutral in the polls campaign.
-- by LALITH on 2015-07-06

I hope that they also get rid of Dinesh Gunewardena the perpetrator of the UDA laws of 1999, the most corrupt laws ever conceived by a man to make those in Government deprive house owners of their birth rights, water and noise pollution. The truth is in https://youtu.be/HFbdLNh4fLw and the case and other people's needs are in Sri Lankan Governance for and by People (non political) https://www.facebook.com/groups/1454914101430660/, Rosy Senananayke helps, we need people not only with compassion but power to help turn the corruption into deeds for people! Let them vote for the people who work for them from their own communities. .
-- by coolandy2000 on 2015-07-06

We are getting fed up of these stories which are being published by LEN which do not seem to have any validity but speculations based of hearsay.Credibility of LEN is now becoming an issue.No matter what rumours or reliable sources may be.it is only a statement from President Sirisena could solve the riddle.If he has 40 years or so of political experience as claimed, surely he should have the backbone as well to openly state his position thus quelling any doubts
-- by lakshman on 2015-07-06

This is the government we were dreaming:Mitree and Ranil.Please be honest and vote for the good governance .Not to the bloody rajapaksha.He should be stoned and killed.The thief of people's money.The cheater.
-- by Ruwan on 2015-07-06