A most corrupt appointed to the Bribery and Corruption..! Oh.. Gotabaya’s law abiding country; Whither Sri Lanka 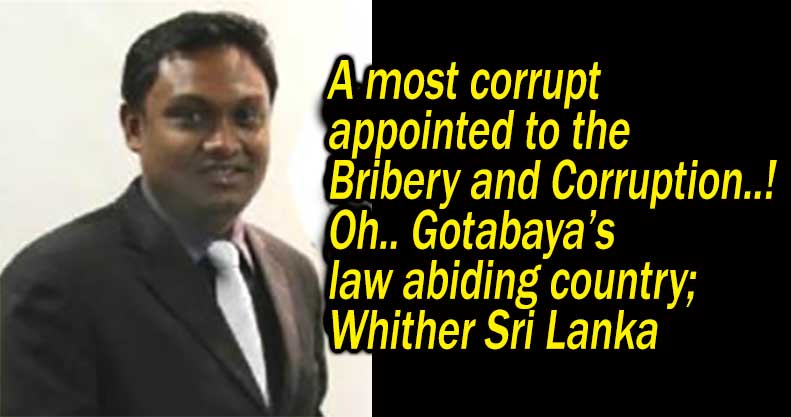 (Lanka-e-News- 26.Jan.2020, 5.20PM) Kanishka Wijerathne who was appointed as the new director general of the Bribery and Corruption is a Rajapaksa fanatic who is a pro Rajapaksa associate famous for his sordid judgments. He is a relative to the Rajapaksa family.

Before appointing Kanishka, President Gotabaya has personally called the former Director General Sarath Jayamanne to resign. That was the reason for his recent resignation. Nandasena had proposed to appoint him as a judge, but Sarath Jayamanne has not agreed, and went to his former Attorney General's Department and took up the Additional Solicitor Generals post.

Later he appeared for the abduction of the 11 students’ case on behalf of the attorney generals department. Sarath Jayamanne is a talented lawyer for criminal cases.

However, Kanishka Wijeratne, who was appointed as the new Director General, is a corrupt judge who violated the law in broad day light to protect the elephant thief Thilina Gamage when he was serving as the Gangodawila Magistrate.

As a judge he deliberately accepted fake documents as legal. He granted bail for non-bailable cases by hearing the cases until 7 pm. He scoffed the judge’s bench by releasing the accused and allowed him to pay the bail money the next day. Due to that the bar association complained five serious charges to the judicial services commission against him. He was also accused of violating the oath of office when he was sworn in as a prosecutor.

When he was appointed to the Judicial Service Commission in the decade of the Rajapaksas' vandalism and urged the judges to give the Rajapaksas the necessary verdicts. During official foreign tours he undermined the country’s reputation ad slept with prostitutes. The Judicial Service Commission has received numerous complaints regarding all these acts.

Here are some of the previous news reported by Lanka e News on Kanishka Wijeratne. Reading them will help you understand this appointment.

⋆Herein is Thilina’s fake document used by Kanishka to make a mockery of justice and deceive citizens..!