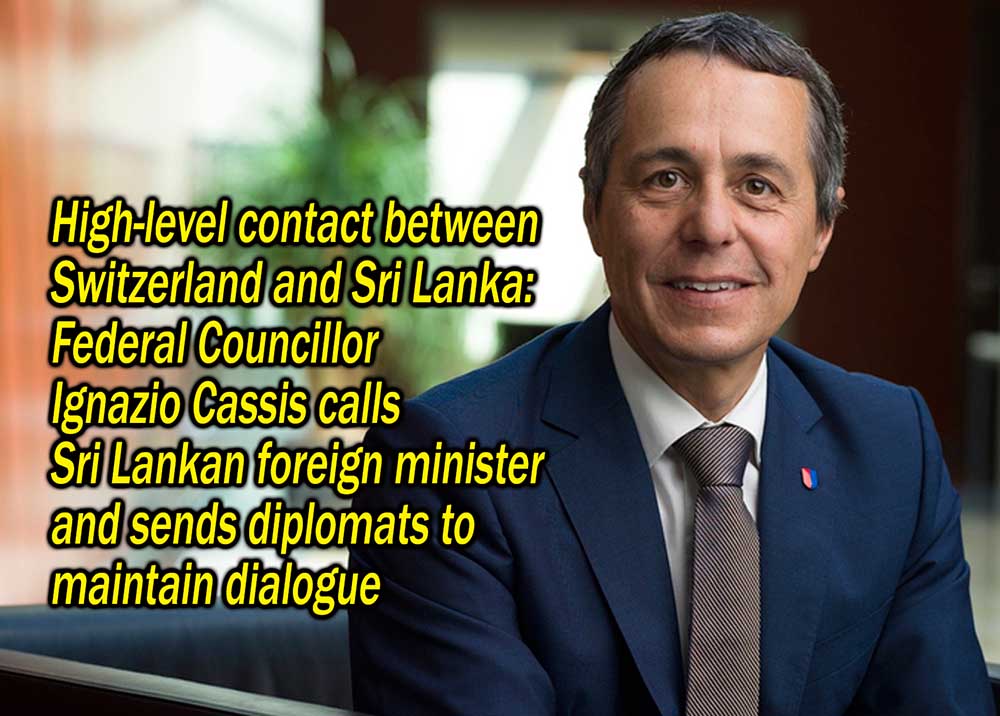 (Lanka-e-News -20.Dec.2019, 11.30 PM) Switzerland is continuing high-level talks with Sri Lanka to resolve the current crisis. Federal Councillor Ignazio Cassis phoned his Sri Lankan counterpart, Foreign Minister Dinesh Gunawardena, on 18 December 2019 to inform him that Switzerland was sending former ambassador Jörg Frieden to Sri Lanka. Under the lead of this experienced diplomat, possibilities for clarifying the security incident at the Swiss embassy in Colombo are to be explored. Mr Cassis also emphasised that the Swiss Federal Department of Foreign Affairs (FDFA) considers the health and safety of its staff to be paramount, and that it is the responsibility of the Sri Lankan authorities to ensure that these are protected in the further proceedings.

During his telephone conversation with Mr Gunawardena, Mr Cassis outlined Switzerland's position. The security incident has severely affected the health of the local staff member of the Swiss embassy in question. In its capacity as an employer, the FDFA prioritises the health and safety of all its staff. To this end, Mr Cassis noted that the Sri Lankan authorities are responsible for ensuring that the health and safety of FDFA staff are protected, which includes the embassy employee involved in the current proceedings.

Mr Cassis also expressed his regret at the decision by the examining magistrate to place the local employee concerned in pre-trial detention, where the conditions do not take into account her state of health in any way. He therefore asked Mr Gunawardena to transfer her to a more appropriate location, such as a hospital, on humanitarian grounds. Switzerland considers the Sri Lankan authorities to be responsible for the health and safety of all its embassy staff.

The Swiss ambassador in Colombo, Hanspeter Mock, had already underlined at a meeting on Tuesday with the Sri Lankan Attorney General that in this high-profile case, Sri Lanka's reputation as a country that upholds the rule of law was at stake.

During his telephone conversation with Mr Gunawardena, Mr Cassis also pointed out that the high level of media coverage, lack of privacy safeguards and public condemnation in this case not only endangered Swiss embassy staff but also eroded the trust and confidence required to jointly clarify the incident.

Mr Cassis emphasised that Switzerland was keen to clarify the incident together with the Sri Lankan authorities, which is why an experienced diplomat, former ambassador Jörg Frieden, had been sent to Colombo. Mr Frieden is expected to explore possible solutions in communication with the Sri Lankan authorities, and thus lend support to the Swiss embassy. This additional contact at the diplomatic level is also intended to strengthen the basis of trust between Switzerland and Sri Lanka.

Following his telephone conversation with Mr Cassis, Mr Gunawardena met with Mr Mock and Mr Frieden today in order to maintain dialogue with a view to finding a solution. The Swiss ambassadors stressed that in the present case, the principle of the presumption of innocence applies and that the health and safety of its embassy staff take priority.

Switzerland wishes to maintain close relations with Sri Lanka and support the country as it moves forward.