Gazette with Ministerial Scope Issued; Anarchy in the country..! Ministry of Defense without a Defense Minister, Gota violates the constitution..! Here's the proof..! 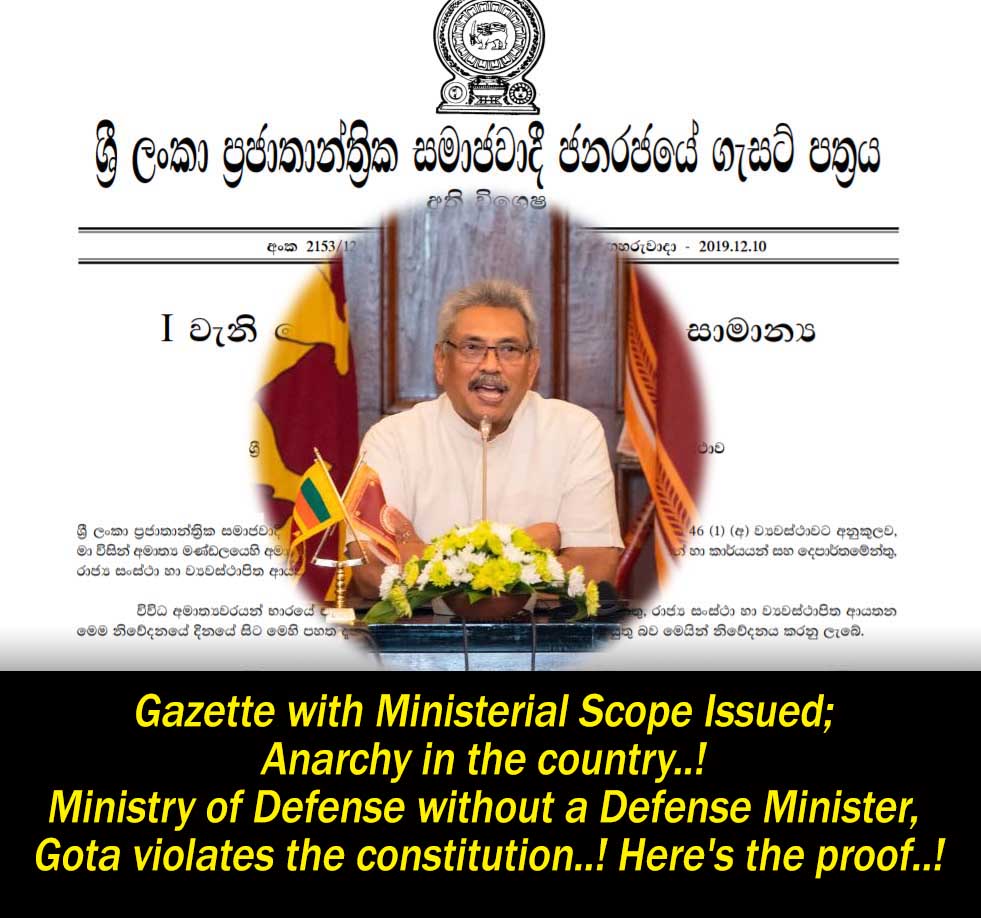 (Lanka-e-News -12.Dec.2019, 10.30 PM) The President has issued a special gazette notification covering the subjects and institutions of ministries belonging to the ministers of the government. Senior lawyers say Gotabhaya Rajapakse's administration is in serious violation of the constitution, according to the gazette notification issued on 27th November related to the appointment of cabinet ministers.

Below is the evidence that Gotabhaya is violating the constitution..

According to the 19th Amendment to the Constitution, the President who succeeds Sirisena is the head of the Cabinet but cannot hold any ministry under him. Even the defense ministry cannot be kept under the president. This is very clearly stated in the 51st sentence of the 19th amendment.

The Gazette Notification of the President Gotabaya’s appointment on November 21 has also announced. "... on this Eighteenth day of November Two Thousand and Nineteen, assumed the Office of President of the Democratic Socialist Republic of Sri Lanka" It does not say that the Presidency was accepted with the national security minister. (Please read the relevant Gazette - http://www.documents.gov.lk/files/egz/2019/11/2150-41_E.pdf )

The Gazette notification issued later appointing the Prime minister Mahinda Rajapaksa too does not state the responsibility of a Defense Minister. (Please read the relevant Gazette - http://www.documents.gov.lk/files/egz/2019/11/2151-38_E.pdf )

The gazette notification which announced who are the cabinet ministers too does not state about a defense minister. Although some media reports have claimed that the Defense Ministry was handed over to Prime Minister Mahinda Rajapaksa, it was not in the gazette notification issued. This can be proven by reading the Gazette Notification of the above Cabinet Ministers.

Despite this, 31 institutions have been gazetted for the Ministry of Defense in the gazette notification, which includes the ministry subjects and institutions issued at midnight 10th.

How to swallow food without a stomach ?

A senior legal expert on the constitution stated that President Sirisena took over the Rupavahini Corporation after the Rupavahini Corporation was taken over by the Defense Ministry. Since Sirisena had only a few ministries under his control, it could have been incorporated into a ministry but the next president, Gotabhaya Rajapaksa, was not given such a provision in the constitution.

Therefore president cannot possess institutions which come under the defense ministry according to the 10th gazette.

Gotabayas administration is a violation of the constitution and illegal..

Moreover, there can be no defense secretary without an official Defense Minister. The orders of retired Major General Kamal Gunaratne, who is acting as the Secretary of Defense, will also be illegal. Therefore Gotabhaya Rajapaksa is governing an unconstitutional and illegal regime.

This clearly has to be resolved by the Supreme Court. The 19th Amendment also provides for the possibility of filing a fundamental rights petition against the President, even if he is granted immunity. President Gotabhaya has been ruling the country in violation of the Constitution, violating the fundamental rights of the people. This is truly anarchy.

The law experts of the opposition Sajith group without fighting with each other for positions should come forward and save the country from anarchy.