Gota is a jackpot to the US, future devastation of Sri Lanka, How Shri Wickrama Rajasinghe was taken to Velur 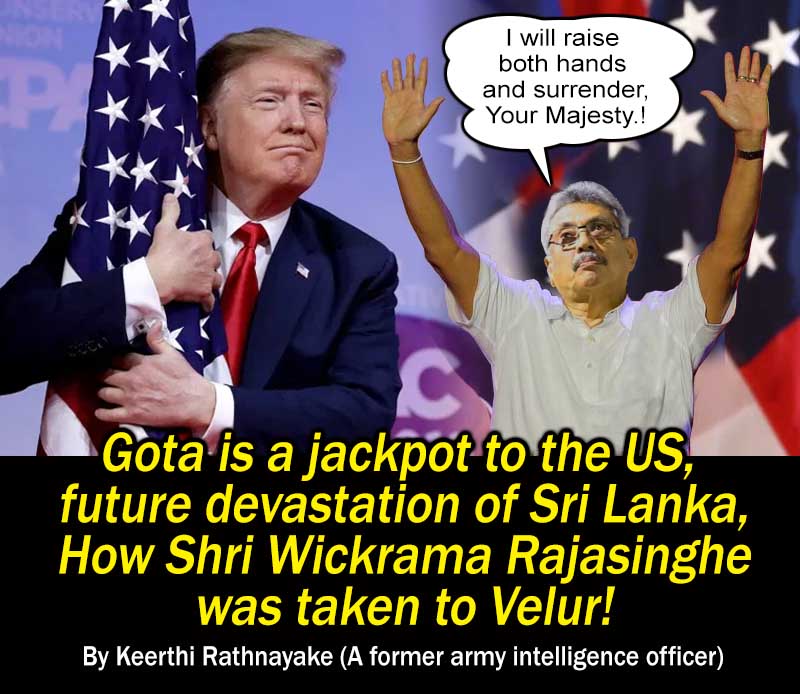 (Lanka-e-News- 30.Aug.2019, 2.30PM)  Sri Lanka Podujana Peramuna has nominated Gotabaya Rajapaksa as its candidate. There is lots of discussions and debate about his American citizenship in the political arena. But what many of us do not realize is that there is a threatening side that Gotabaya’s renouncing of US citizenship does not address.

Chapter 212 of the US Immigration & Nationality Act, effective from 1965, addresses the rights, responsibilities and legal obligations of individuals who voluntarily give up their citizenship. It will go into great detail and we will cover some of the points that are relevant to us below.

A citizen of the United States will not be relieved of his or her obligations to the national security and security services of the country only if they have renounced their citizenship. He is bound to maintain his loyalty to America regardless of what ever country’s he lives and whatever citizenship he has obtained. The people of Sri Lanka country must decide how wise it is to make Gotabaya the first citizen of Sri Lanka.

Another important point in the above chapter is that American federal law enables law enforcement to act at any time for offenses committed while a former citizen was a citizen of the United States. According to the law, if Gotabaya becomes the President of Sri Lanka and make a decision that US dislikes, the US can falsify him for a case filed in the US and make him dance according to the US. The people of this country must decide how wise it is to make such a Gotabaya as the president of Sri Lanka.

This is another dangerous aspect of the above American Act. This enables a former citizen of the United States to be taken into custody by the United States at any time for legal or national security reasons. This enables the US to take Gotabhaya Rajapaksa anytime if he deviates from the US agenda and act legally. If such happens what a disgrace it could be for the Sri Lankan nation. If such happens can Sri Lankans declare a war with the US? The people of Sri Lanka should be wise enough whether to make Gotabaya the first citizen of the country.

The US has the war crime proofs of Gota

Gotabaya was one of the worse criminal during the 88/89 JVP insurgency. Gotabaya Rajapaksa is the owner of the largest mass grave found in Matale Sri Lanka. During the war it was then army commander Sarath Fonseka who was responsible for the war in the north and east. Throughout the war Gotabaya has gone to the north only once. Assassin Gota by residing in AC rooms from Colombo did a strange play. He was involved in abductions, extortions ad hunting journalists and reporters. Gota was a hollow warrior who snatched the war victory of the armed forces that sacrificed their lives and named it as Gotas war. It was Gotabaya who disrepute the war victory by indulging in war crimes. Shavendra, bypassing the army commander Fonseka carried out illegal orders of defense secretary Gotabaya. Gotabaya’s crimes are like fire under ashes that US can light up any moment because they have evidence. The people should think how wise it is to make such Gotabaya the first citizen of the country.

The present situation is a great advantage for the US At a time when the Chinese power in the Indian Ocean has skyrocketed with the help of Mahinda and Sirisena, At a time when the US is thinking where to move the US forces from Afghanistan, It is a great profit for the US when puppet like Gota who can dance according to the US tune becomes the president of Sri Lanka. His supporters and party leaders must once again think whether or not the country is in great jeopardy for the sake of political slavery.

The US has completed its plan to install a force that could subvert the Chinese domination of Sri Lanka. At a time when the US is thinking where to expel the US forces in Afghanistan, Gotabaya is a jackpot for the US. Gota’s nose trap is owned by the US. The story is very simple. Although Gota has renounced the US citizenship it is conditional. Either Gota should give what the US demands if not the latter has to pay the interest for the sins committed. When Gota becomes the president he would be taken to Mauritius similar to Sri Wicrama Rajasinghe who was taken to Velur as a prisoner.

If Sajith and his cronies are anti-Rajapaksa, more than mudslinging at his own senior leaders these are the facts that should reveal to the public today.