Re-emergence of Islamic Radicalism - A warning from CEMSL 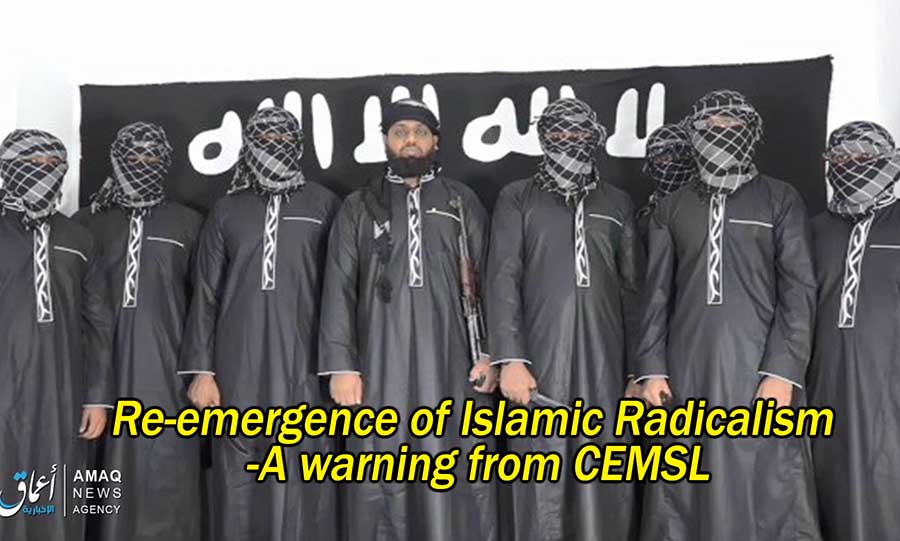 (Lanka-e-News -09.Aug.2019, 11.30PM) From the inception of Islam, each and every groups and sects of Islam has been threatening and oppressing the people who do not accept the conditions imposed by Islam. Still we can hear the war drums perpetrated during the past centuries imposed on the people who rejected, denounced and did not accept the philosophy of Islam. Those who were patronized and trained by Thawheed and Jamathe Islami organizations involved in Easter Sunday attacks while they were operating as a separate unit was one example for the continuity of the above said despicable activities

It is of paramount importance that several discourses and discussions took place in the aftermath of this attack. Those who were affected by the violence and oppression in the name of Islam and Islam’s so called holiness came out openly and commenced to talk about the necessary changes in respect of Islamic preaching and rules. The important factor that contributed to this new phenomenon is the voices expressed by people who were seriously affected Islamic Chauvinism and radicalism. The government and other social organizations have condemned this radical trend and that is the reason why there is a change in the attitude of the Muslims.

A few days ago several Muslim Women’s Organizations conducted a media conference and emphasized the need for changes in the Muslim Marriages and Divorce Act (MMDA) and they continue to express these views through the media and social. We can see the Islamic radicalists are expressing their venomus opposition to the views expressed by the women’s organizations. The local Islamic radicalists are coming with very violent propaganda against these women in the public fora without any guilty feelings. On the other hand, All Ceylon Jamiyaththul Ulama ( ACJU ) has rejected the reforms put forward by Muslim Women’s organizations and went on to control Muslim politicians in this regard. Under these circumstances the radical criticism against the Muslim women who are demanding reforms has become a major threat in the social media.

Council of Ex-Muslims of Sri Lanka (CEMSL) would like to point out that as long as radicalism, violence fundamentalism, gender discrimination and religious fanaticism are preached and taught according to Qur’an, Hadees and other Islamic scriptures, Islamic terrorism cannot be eradicated. Experiences form the past have taught us the lesson that the growing Islamic extremism can be transformed in to terrorism at any moment, so Council of Ex-Muslims of Sri Lanka urges the government to take the matter in to serious consideration to prevent future catastrophes. The government that selected by the people should not allow the fundamentalist organisations such as All Ceylon Jamaythul Ulama,  which was not selected by the people, to interfere and pressurize in to the matters related to the law of the country and the matters of the Muslims and further the government should bring an immediate end to this interference. Council of Ex-Muslims of Sri Lanka calls the government and the representatives of the people to establish one law for all and completely abolish personal laws and acts such as Muslim Marriage and Divorce Act. Further CEMSL request the government to take necessary measures to tackle down the re-emergence of the Islamic extremism.