Sarath Fonseka would be the right match for Gotabaya..! 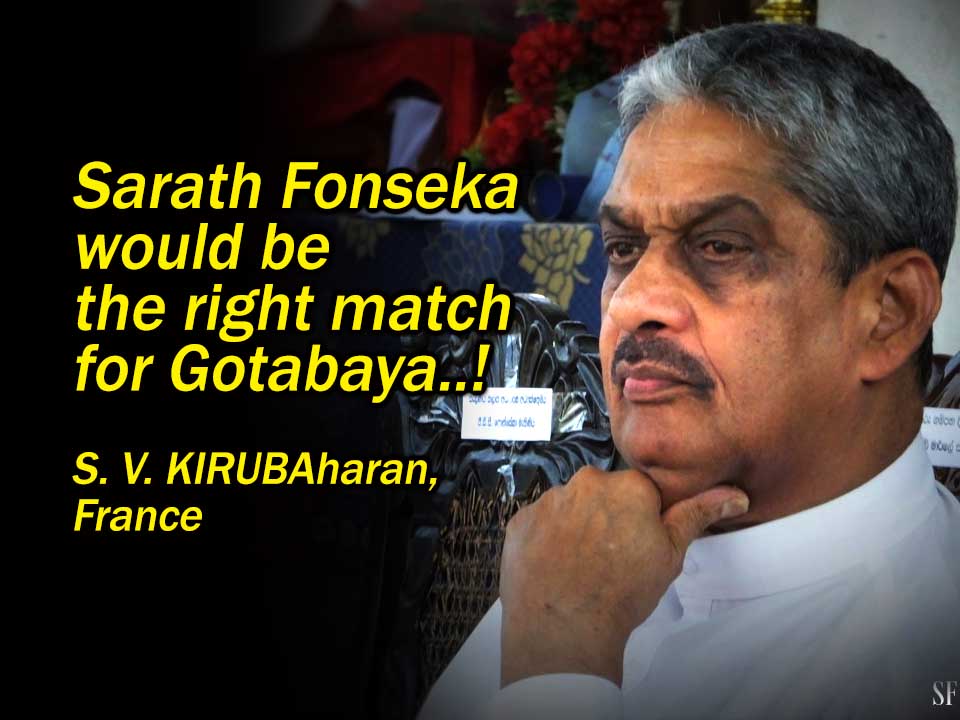 (Lanka-e-News -25.July.2019, 5.30PM) Before the 2010 Presidential Election in Sri Lanka, I predicted many issues in one of the Colombo print media (The Sunday Leader) and I was proved right. Even my predication about the winning candidate was correct. Unfortunately, then the muscle power of the Rajapaksa family and the bad influence of then Election Commissioner, led to the man who won the Presidential election ending up in prison, while the loser and his family became power-hungry multi-millionaires in Sri Lanka.

On 10th January 2010, I wrote the following in my article, “After the Election: What will happen to the President’s Promises?”

“I can still recall what some TNA MPs told us in the past about what was said by General Sarath Fonseka at Temple Trees, in front of President Rajapaksa — when they complained about soldiers shooting and killing innocent people in the north and east. Sarath Fonseka had said, “I have trained my soldiers to shoot directly and not to miss the targets.” This incident suggests that then General Sarath Fonseka was not ambitious to contest the election for the presidency.”

“If the people want to benefit, General Sarath Fonseka should lose this election, which is unlikely. If he wins the election, there is a greater chance that old friends will be united. In the unlikely scenario of Rajapaksa winning the election, Sarath Fonseka would probably spill more beans and he may be encouraged by his advisors to contest parliamentary elections. In the meantime, the Rajapaksas may be preparing their law suit against him with false allegations and evidence”.

“Whatever said and done, after the Presidential election, there will be more friends becoming enemies and vice versa. General Sarath Fonseka has already denied his statement (regard to white-flag) and demanded rectification in The Sunday Leader. If that is the case, what will happen to his election promises?” (Excerpts, “After the Election: What will happen To the President’s Promises?” 10th January 2010)

Having said all this, Sarath Fonseka is not my favourite. However, being a strategic thinker on realities, practicalities and what is good for voters, I wrote the above.

Sri Lanka’s next Presidential election may be due in December. As usual, the Rajapaksa family is in the limelight. The man accused of war-crimes and corruption, the former Defence Secretary Gotabaya Rajapaksa seems to be contesting the election on behalf of Rajapaksa family and their political party, the SLPP - Sri Lanka Podujana Peramuna (Sri Lanka People's Front). Unfortunately, so far the UNP - United National Party has not found a suitable candidate to match Gotabaya, who is known in the South as a ‘war hero’. To be frank, knowing what happened during the end of the war; I will not consider any Sri Lankan soldier a war hero. It was Indian soldiers who concluded the war. There is ample evidence of this, which is why India is worried about war crime suits against Sri Lanka.

When we compare SF to Gotabaya, both are strong Sinhala Buddhists from the deep South. I do not know anything about the caste difference, widely practice in the South. Gotabaya resigned and ran away from the theatre of war in 1990s to America, whereas Sarath Fonseka stayed as a strong soldier and rose to the position of Commander because of his efficiency and capabilities. Everyone knows that he never used the influence of either his siblings or his family, like Gotabaya did.

Now coming back to the Presidential election in 2010 - many sources still maintain that in fact SF won the election. But as usual members of the Rajapaksa family manipulated the election results. Many ask the question, what happened to the then Election Commissioner - Dayananda Dissanayake on the day of the Presidential election in 2010? It was believed that Basil Rajapaksa was managing the task of the Election Commissioner.

“The BBC's Charles Haviland in Colombo says Wednesday's demonstration was much bigger than rallies usually seen in the capital. Holding banners in Sinhala, Tamil and English, opposition supporters thronged a network of streets in the city centre. They shouted that the election was "unclean" and would have been won by Gen Fonseka, but for what they allege was computer rigging.” (Excerpt – BBC News, 3 February 2010) http://news.bbc.co.uk/1/hi/world/south_asia/8496856.stm

One of the main reasons why Mahinda Rajapaksa won the election was that he was already a President in power and used all means in the 2010 elections. In the forthcoming election, if SF faces Gotabaya, it will be an easy win for SF because the government machinery cannot be manipulated by Rajapaksa family this time. I mean the election Commissioner and other means.

Although both are known to the South as ‘war heroes’, in SF’s language, I will call both of them ‘cardboard heroes’, bogusly claiming the victory of the Indian soldiers. It is a shameful act of Sri Lanka, especially Rajapaksa’s regime.

I’m in touch with some members of civil society in the South. They had reservations in 2010 and now too about SF becoming a Presidential candidate. They fail to understand that ‘the known devil (SF) is better than unknown (or known) angel (Gotabaya)’. I wonder whether they will say both are devils or angels! We should remember that SF always maintains that if there is a war crime investigation, he will prove the soldiers are innocent. Whether the soldiers are innocent or guilty is secondary, but SF agreeing to appear in an investigation is a matter of interest not only to the victims but to the international community as well.

Also, we should not forget that SF will be polling a large number of sympathy votes for many reasons. He won the 2010 Presidential election, faced humiliation after humiliation, his family was penalised and he ended up in prison. Secondly the unintelligent President Sirisena continuously refuses to appoint him as the Minister of Law and order. This raises the question whether Sirisena is worried that SF would give priority to justice rather than to influence.

Gotabaya is an American citizen who is trying to give up his citizenship with certain reservations in order to contest the Presidential elections. SF is a former green card holder in America. So they both match each other in some ways. In 2010, SF was a common candidate, yet some UNP members had reservations about voting for him. This time, when he contests the election as a UNP candidate, there is no doubt that he will easily defeat Gotabaya. If the UNP is thinking of a winning candidate in the next Presidential election, they should put forward SF as their candidate. This is food for thought for the UNP and others.

Unexpectedly, if Gotabaya wins the forthcoming Presidential election, he will renew the list of Tamil diaspora individuals and groups, who were proscribed or banned by Sri Lanka. To be noted, it was a surprise to some that my name was not included in this list. Some reliable sources told us that my name is already on their list for elimination. I have experienced confirmation of this on a few occasions in Europe, especially in Paris. I have written about all this in the past.