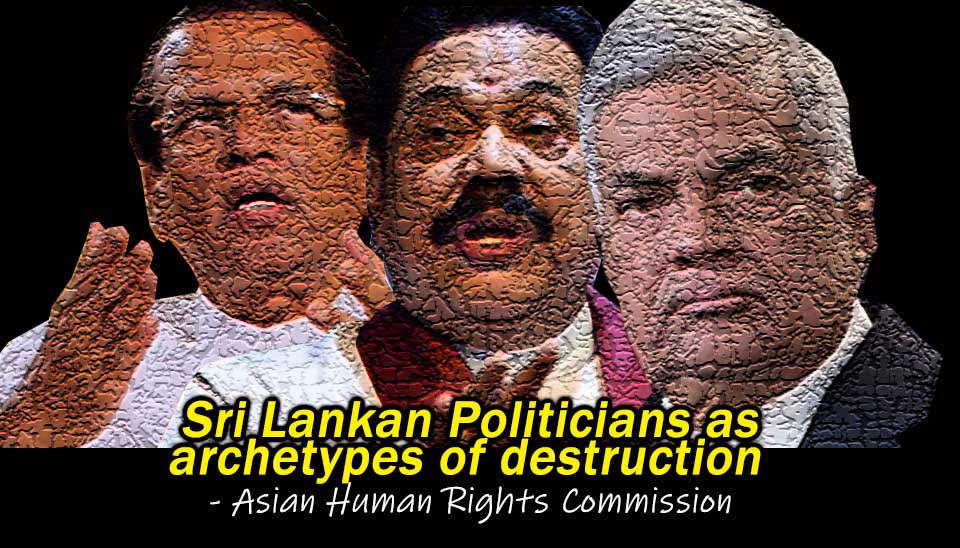 (Lanka-e-News - 16.July.2019, 11.50AM) In the Sri Lankan mind, politicians are thought to be engaged in the destruction of the lives of the people and the foundations of the nation.

In the subconscious or unconscious, this has gone so deep that to speak of them as archetypes in the Jungian sense is no exaggeration at all.

It is commonly said that all 225 members of parliament should be dismissed for the good of the people.

To be an archetype of destruction is worse than being a mere dictator or tyrant. History shows that in the past of many countries there were kings who were basically dictators but who did much for the benefit of the people they ruled over and for the development of the political structures and institutions within which people could achieve peace and protection. A tyrant is essentially a person who, as John Locke pointed out, did not have the common good in this political designs but mostly ruled for their own self interest. Both these categories use power for ends that they were conscious of, for the better or worse for the people.

But to have legislators and rulers that are not even aware of what they are trying to achieve is even worse than being subjected a dictator or a tyrant. Their actions and their speech, whether intentionally or not, are directed towards destroying the better moral and legal foundations of their countries. The worst part of it is that they are often not concerned with any good aims, meaning either good for the nation or for themselves. The self-destructive nature of Sri Lankan politicians was well portrayed in one silly even that people saw on television recently: the so-called debate on the no confidence motion against the government relating to its inability to prevent the events of 23rd April Easter Sunday attacks.

It was a silly debate because none of the speakers were really revealing anything that people have not already known for some time. Specifically, there was information that bombings were going to take place in Sri Lanka by a terrorist group, which would cause serious harm. Beyond this, nobody among the speakers in the debate made any attempt to reveal information about what caused this bombing, how it was organized, how and where the suicide bombers were trained, who brought in the necessary money and other materials into the country to enable the attacks, and what the command responsibility of the state was within such a context in terms of the framework of the rule of law.

In fact, calling it a debate was ludicrous. It was merely a childish play just to hoodwink the people. The movers of the resolution and those who supported it were seeing the 23rd April events as a great opportunity that may allow them to topple the government, with the hope that it would provide opportunities for them to come to power.

On the other hand, the government, instead of revealing and analyzing their own decisions relating to the catastrophic events that happened, and perhaps taking a more confessional approach with concrete plans for the future protection of the people, were engaged in preserving their power. Further, the people in government was also concerned with using the occasion to further the conflict between two groups that are now at loggerheads. This kind of quarrelsome shouting at each other is not a debate.

The idea of a debate has a long history, both in Western culture as well as in the East. When Socrates engaged with the people in the latter part of his life, questioning them and himself about their pretenses and the actual lack of knowledge about the things that they claimed to know about, he was basically pursuing a path that showed, through the revelations in the gaps in existing knowledge, how to delve deep to understand things better. It is in that spirit that debates began to spread, which gave rise to the whole idea of empiricism as the tool for verifying information to get at something closer to the truth as much as possible. Renee Descartes became the symbol of that kind of investigation wherein every observation was doubted and, by the process of doubting, what was obviously untrue was eliminated, thereby paving the path for something that was true or closer to the truth.

Modern science is founded on this principle, with various schools that developed this basic concept from many different points of view.

Looking for the truth about a catastrophic event is necessary for the very survival of a people. The search for the truth behind such things is therefore vital to the community and also to all the institutions of the state that are functioning in order to achieve a harmonious, peaceful and productive society.

Therefore, it was simply silly to waste that time when people are agonizing to get to the truth. The people’s representatives should not have wasted that time by making a cynical attempt to get some limited advantages for themselves. Such attempts prove that they have, in fact, become an archetype of destruction.

Although the debate was ludicrous, it was an expensive affair. The parliamentary meeting was broadcast to the whole nation, costing a lot of money that was especially wasteful in a country that is so indebted that all its national revenue goes to the payment of loans.

The issue of expenses apart, there is the damage that this kind of “debate” does to the minds of the people’s representatives themselves, as well as to the minds of the people of the country, particularly the young. Young people watching this kind of quarrel don’t learn anything about the art of debating and searching for truth, or about the responsibilities that people owe each other when facing such events that threaten the whole nation.

If this was not a parliamentary debate but a mere teledrama, it is no doubt that many people would stop watching it. It even lacks the elements of a good drama. There is no critical or aesthetic value to this open quarrel, with politicians shouting at each other while knowing that the whole exercise would ultimately produce nothing.

When a country’s ruling elites, consisting of both the governing and opposition parties, become archetypes of destruction, what could such a nation produce? Is it a surprise that everything is getting worse, including the country’s indebtedness, its dropping productivity, the contamination of medicine in hospitals and dispensaries, poor quality education and transport, just to mention a few?

When a destructive archetype emerges to the surfaces, it only causes pain. In this case, the whole nation is affected.

It is this situation that, as one prominent journalist said recently, has led the country to a state similar to a volcano close to erupting. It would be more accurate to say that the volcano is already erupting, but that things may get even worse in the time to come.