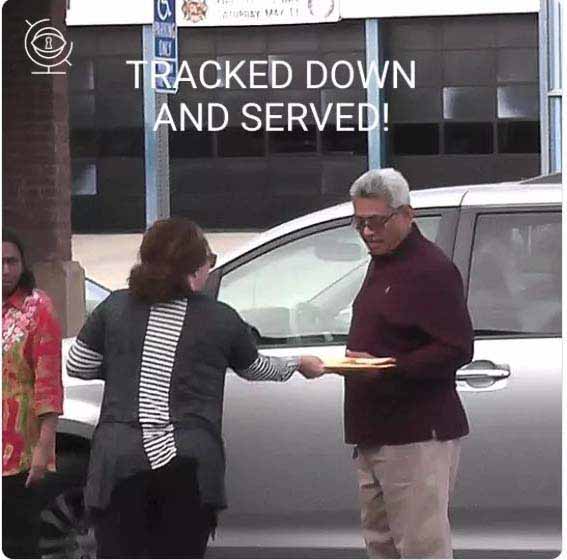 Roy Samathanam made the complaint in the U.S. District Court for the Central District of California against Mr. Rajapaksa, who is a dual US-Sri Lankan citizen. The case was brought under the Torture Victim Protection Act, which gives torture victims legal redress in US courts.

Notice was formally served on Mr. Rajapaksa on Sunday night. Notice was also served at the same time in a separate case filed by another organisation on behalf of assassinated journalist Lasantha Wickrematunge.

Roy Samathanam, a Canadian national, was arrested on false charges in the Sri Lankan capital, Colombo in September 2007 by Sri Lankan police who reported directly to Defence Secretary Gotabaya Rajapaksa at the time. Visiting Sri Lanka to marry his wife, Mr Samathanam was detained for three years and repeatedly denied access to a lawyer or a judge. Under Mr Rajapaksa’s command, guards tortured Mr Samathanam, threatened to rape and kill his wife and child, and made him watch the electrocution of other prisoners. He was forced to sign a false confession before being released in August 2010 on a plea deal.

Since his release, Mr. Samathanam has been an outspoken advocate. In 2011, he testified about his ordeal in the Parliament of Canada. In 2016, Mr. Samathanam won a UN Human Rights Committee case, but Sri Lanka has failed to abide by the compensation ruling.

“While I was in prison I learned what inhumanity looks like,” said plaintiff Roy Samathanam. “So far, there has been no accountability, so I am happy to take this first step to get justice. This action will give torture victims in Sri Lanka hope for the future.”

“Mr Samathanam was one of countless civilians detained and tortured in Sri Lanka because of their ethnic Tamil identity,” said human rights lawyer Scott Gilmore, who led the compensation case successfully brought by the family of Sunday Times journalist, Marie Colvin, against the Government of Syria. “Under international law, Mr Rajapaksa bears command responsibility for the abuses carried by his security forces.”

Yasmin Sooka, executive director ITJP: “Roy’s torture case is just one of many hundreds the ITJP has documented in Sri Lanka that are systematic and speak to incredible levels of impunity. This is believed to be the first instance of civil suits being filed against Gotabaya Rajapaksa abroad. We hope that others will come forward and contact us. They can join a collective action for redress.”

“We commend Roy for his bravery in being among the first to step forward and we are happy that our expertise and resources can benefit the struggle for justice in Sri Lanka,” said Michael Hausfeld, Chairman Hausfeld, “We hope more victims will come forward”.

(This is the statement released by Hausfeld law firm in USA and International Truth and Justice Project, ITJP)

Scott Gilmore is an international human rights lawyer based in Washington, DC. He has represented survivors of torture and war crimes from around the world, including the family of ISIS hostage James Foley and Haitian victims of Baby Doc Duvalier. In January 2019, Mr Gilmore won a $303.6 million lawsuit against the Syrian Assad Regime for the killing of Sunday Times correspondent Marie Colvin.

Hausfeld is a leading global law firm with offices in Berlin, Boston, Brussels, Düsseldorf, London, Stockholm, New York, Paris, Philadelphia, San Francisco, and Washington, D.C. The firm has a broad range of complex litigation expertise, particularly in antitrust/competition, financial services, sports and entertainment, environmental, mass torts, consumer protection, and human rights matters, often with an international dimension. Hausfeld is the only claimants’ firm to be ranked by the Legal 500 and Chambers & Partners as a top tier firm in private enforcement of antitrust/competition law in both the United States and Europe.

The International Truth and Justice Project is an NGO run by the South African transitional justice expert Yasmin Sooka. It has the largest archive of testimony and other information pertaining to the final phase of the civil war in Sri Lanka and the post-war period. In August 2017, the ITJP filed 4 universal jurisdiction cases in Chile, Brazil, Peru and Colombia against a Sri Lankan retired General who was a diplomat there for his alleged role in the war and torture.