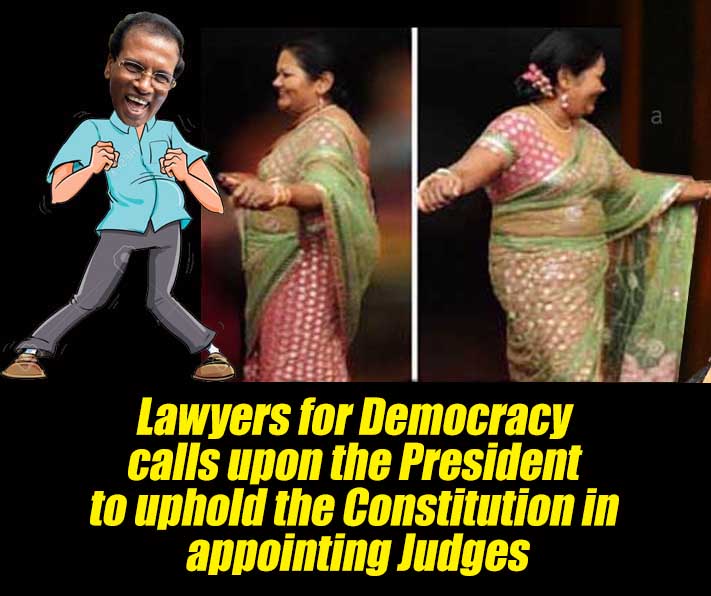 (Lanka e News -09.Feb.2019, 10.00PM) Lawyers for Democracy (LfD) is gravely concerned with the current constitutional impasse created due to the delay in appointing the President of the Court of Appeal. The process of appointment of judges set out in the Constitution must be respected to the letter and spirit of the Constitution. LfD notes that this delay sends a deeply troubling signal that the Constitution is to be disregarded according to the whims and fancies of the Executive and contrary to the Nineteenth Amendment to the Constitution. LfD takes this opportunity to urge President Sirisena to revisit his own pledges and to take immediate steps to uphold the Constitution.

LfD wishes clarify the constitutional position in this connection:

(2) The provisions of paragraph (1) of this Article shall apply in respect of any person appointed to act for a period exceeding fourteen days, in any Office specified in the Schedule to this Article:

Provided that no person shall be appointed to act in any such office for successive periods not exceeding fourteen days, unless such acting appointment has been approved by the Council on a recommendation by the President.

We also note that there has been a representation made by the Bar Association of Sri Lanka (BASL) pressing for an identified judge to be appointed. Such canvassing is inappropriate and highly damaging to the reputation of the BASL.

Lawyers for Democracy urges President Sirisena to take swift action to make appointments in keeping with the spirit and purpose of the Nineteenth Amendment and to do his duty as provided in the Constitution.

On behalf of the Conveners