President statement is an erroneous statement - Special reply by the Hon. Speaker at the Commencement of Parliament 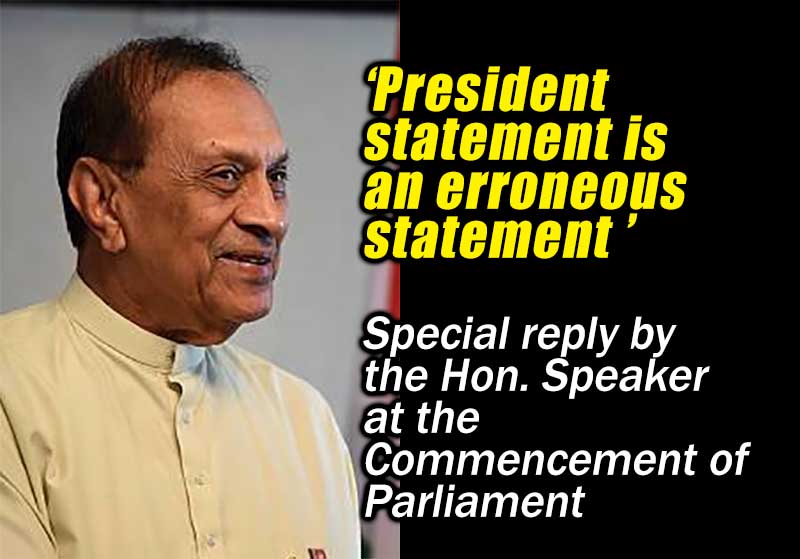 Statement Regarding the Activities of the Constitutional Council

I made a statement before this August Assembly even on 25th January 2019 regarding the activities of the Constitutional Council.

I informed on that occasion that I had tabled on 08.12.2016 in Parliament a report containing the guidelines followed by the Constitutional Council in submitting nominations for appointing members to the Independent Commissions laid down in Article 41 (b) of the Constitution and in approving the nominees sent to us by the President for appointing persons to positions stipulated in Article 41 (c) of the Constitution as stated by me. In addition to that, the report containing the aforesaid guidelines will be tabled in Parliament tomorrow for the information of Hon. Members.

It shall be mentioned that seniority, integrity, independence and impartiality of persons are considered in addition to the said guidelines in appointing persons to respective positions.

In the letter submitted by me to His Excellency the President on 2019.01.02, the method adopted by us in selecting the suitable persons was explained. In the statement made by H.E. the President in Parliament yesterday, the claim made by him that the Constitutional Council had stated that ‘the seniority is not at all counted’ is an erroneous statement.

What we stated was that seniority was not the only yardstick that we had adopted.

I wish to inform this august assembly, that each and every name ratified by us were the names only in the lists recommended by His Excellency the President and that the Constitutional Council had not recommended any name whimsically or outside the lists. Therefore, I wish to mention that no irregularity or injustice was committed in selecting names out of the names submitted by H.E. the President. We see nothing wrong in this.

Although it is stated by H E the President that 12 names had been rejected by the Constitutional Assembly, it is an erroneous statement.

Only one name was selected by us in the instances where 3 to 4 names had been proposed for one vacancy. Depicting such incidents as rejections of names is an injustice incurred on the constitutional Assembly.

The  Constitutional Assembly becomes a  futile effort, if only the seniority is considered  prominence. Even HE the president has  done similarly. We do not intend to enter into arguments citing such instances one by one. It is our  duty to select the qualified persons without being distracted by  any influences as per the 19th amendment to the Constitution. We are of the opinion  that the said duty has been duly fulfilled by us. As we stated earlier, the recognized political parties are represented in the Assembly.  One party has no majority. No influences had been made with pertinence to the approval of names. The members are privileged to express their discretion  in an independent manner. As a tribute to the current and former members of the Council, it is mentioned that all the decisions that were taken since the inception of the Committee  up to the present, had been taken subject to the agreement of the members. The majority of the names sent by him has been approved except a few. No correspondence is made with the relevant parties.  The Constitutional Assembly has been alleged regarding the appointments to the Primary, Magistrate and District courts as well. The appointments to the Supreme Court and the Court of Appeal are only scrutinized by us here. The Judicial services commission is held responsible regarding the other appointments. Hence the aforesaid allegations are not justifiable.

Furthermore, the independent commissions established under the Constitutional Council have brought immense dignity to the country. Our courts of law, which are supreme, have now gained accolades from the world.  Sri Lanka Human Rights Commission has been acclaimed by the United Nations as an esteemed independent commission. The Right to Information Act too has gained world recognition as an outstanding piece of legislation.

It is already said that the progress we have gained in all of the areas mentioned above will be a pillar of strength to Sri Lanka when facing the allegations levelled against us at the Human Rights Conference, which will be held in Geneva, in March.

On several occasions, we have stated that we are keen to meet H E the President and make a presentation in the event explanations are necessary in this regard. We would like to point out that levelling severe criticism against independent commissions without such clarifications causes long-term damage to the country.

Action of the Human Rights Commission too was subjected to criticism yesterday. We have instructed the Commission to present the country with facts to clarify the matter.

However, we consider it the duty of the Constitutional Assembly, as a respect accorded to its members, to make clarifications about two matters stated by H E the President.

The said Commission has informed us that, a formal report had been called with regard to sending of STF personnel to Angunakolapelessa Prison as various facts were presented regarding that incident, and that, according to those facts, no opposition had been expressed during that process. What they did was to get some clarification about the existing system.

It was based on a decision that had been taken according to the consensus reached by all parties including the United Nations Organization / the three armed forces / Ministry of Foreign Affairs and the Human Rights Commission that there was a delay in calling the soldiers who had been sent to Mali back.

The Representative of the United Nations Organization in Sri Lanka has informed us that the Human Rights Commission of Sri Lanka is the only body that has been vested with the powers to select officers for peacekeeping operations in all parts of the world.

It establishes the trust that the international community has placed on the Human Rights Commission of our country.

Therefore, it is important that criticism and allegations that are levelled are just.