Assassination bid is Sirisena’s own orchestration ! 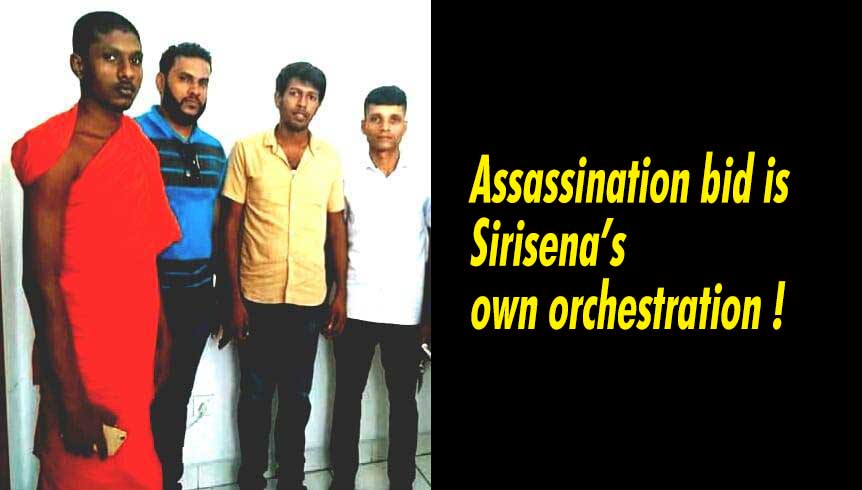 (Lanka e News – 23.Sep.2018, 7.45PM) At the bottom of the so called conspiracy allegedly hatched by DIG Nalaka Silva to murder the president which came to the open through a police informant, is none other than the president himself , it is reported. This is a sequel to a plan of the president to relate a cock and bull story (for which he is most famous) pertaining to reconciliation in the country ,and paint a picture that he is a radical , at the 73 rd general session of the UN which is scheduled for 24th September. That is ,Sirisena is to narrate his ‘radical tale’ (after hiding his ancestral tail ) cashing in on the sympathy evoked in his favor following the so called conspiracy to assassinate him .

His speech revolving around law and order, reconciliation and vision for the future , is so decorated it will be most plausible and hair raising to the listener. The final aim and objective is to get down high profile world leaders like Trump to the country in which direction Mahinda could not succeed, and to portray that a partner in the assassination conspiracy is the prime minister with a view to get rid of him in the final part of Sirisena’s plan and plot.

Namal Kumara was a former air force soldier , a police informant and a Bodhu Bala Sena (BBS) activist . BBS was formed to oppose Mahinda and was a strong arm which masterminded more foul than fair operations. Now the same BBS is on the side of Sirisena .

It was Namal Kumara who apprehended the extremists when they staged protests against the Rohingya refugees and those associated with the riots in Kandy. Though the accusing fingers pointed at Champika Ranawake , Lanka e news always espousing and exposing the truth frankly , fearlessly and forthrightly proved with evidence it was Maithripala Sirisena who was at the bottom of the conspiracy in the Kandy violence ,and not Champika.

It is a well and widely known fact Namal Kumara in the past betrayed Amith Werasinghe of the Mahason Balakaya most treacherously . On the day of the Kandy riots Namal Kumara arrived at the home of Amith and ate the food prepared by Amith’s wife . It was Namal who brought petrol bombs to the house , yet after having dinner , in the night when all have gone to sleep , tipped off the police.

Such an inhuman ungrateful beats would resort to any villainy and treachery any time. Based on the staged drama of president’s assassination , Namal Kumara has now got an Indian linked to it.

It is unfortunate Sirisena plans to win the sympathy of the world at the 73 rd session of the UN , and eliminate the P.M. are just a pipe dream relying on what are in his hands not realizing those are going to explode in those very hands. These are just comedy dramas from the point of view of the world while bringing embarrassment to the country from the standpoint of Sri Lankans.