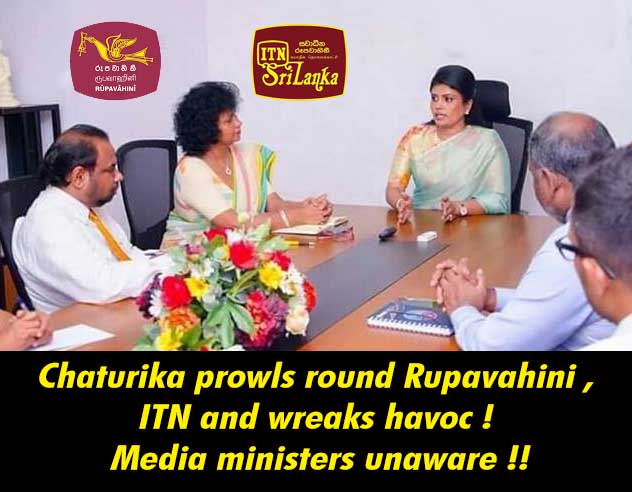 (Lanka e News – 19.Sep.2018, 5.45PM) It is a well known fact that Dharshani Chathurika Sirisena holds no official posts or powers in the state’s hierarchy and is simply the daughter of the president , an embattled leader who is now precariously clinging on to a meager 4 % popularity base . Yet in her abysmal ignorance (being only GCE O/L qualified) she had stormed into the National Rupavahini TV station on the 17 th and conducted herself most rudely and unethically issuing orders to its chairman and the directors , according to reports reaching Lanka e News

Four friends of Janaka who is Chathurika’s paramour had already been appointed over and above Dharma Sri Bandara Ekanayake the media director general of president Gamarala. Raveen Wickremeratne is one such friend. Chathrurika has arrived at the Rupavahini station with Raveen , and introduced him as the one who will be looking after the affairs of Rupavahini on behalf of the president from then on . She has also ordered that an office be arranged for him within the Rupavahini.

Chathurika who is only GCE O/L qualified , before the presidential elections was cooking food at home and just a housewife . Yet yesterday while she was within the Rupavahini she has told the chairperson and the senior directors in a most high handed manner , she has need to summon not only the news division , but all employees of other divisions to give instructions separately .

Might we recall Raveen who was appointed over and above the chairperson of the National Rupavahini was an executive member of the SL cricket association committee .Because Raveen saw to it many millions of rupees are siphoned off into the pockets of Chaturika , the crooked villain Raveen became a henchman of Chaturika .Lanka e news reported the monumental misappropriations of Raveen with cogent and copious evidence via its special feature entitled “sportsman’.And now to the dismay of all Raveen the infamous swindler has been rewarded with the latest appointment at Rupavahini.

Another notorious individual by the name of Ms. Buddhika Ramanayake was also appointed by Chaturika and her paramour to a post above the chairman at ITN.

Buddhika was working as a reporter in the agriculture division of Rapavahini during the Rajapakse nefarious decade . But more than reporting she was known for her ‘sleeping’ to gratify the lascivious desires of sex starved Namal Rajapakse at that time. She was a discarded pest at Rupavahini who is now appointed to the ITN by Chaturika as an official of the president.

Shocking !  No minister knows anything...

When the consensual government was being formed , in accordance with the ration of sharing of the media Institutions between the consensual partners , the ITN belonged to the UNP , but Chaturika has undone that now. Based on reports reaching Lanka e news , like how Chaturika stormed into Rupavahini yesterday (17) and gave orders riding the high horse , she may take Buddhika and barge into the ITN on the 18 th . Now that her head had swollen almost to bursting point , it is the consensus she would not stop at that …she will definitely creep into Broadcasting Corporation and Lake House too to give instructions.

The worst part of this Chaturika ‘s devil dancing to the detriment of the entire country is ,her inability to abide by any ethical code or behave in a civilized manner despite being the daughter of the president of the country .

Mind you , she is wreaking havoc on the media Institutions on an unprecedented scale , while even keeping the media minister in charge in the dark. Not only the media minister , even the deputy minister and the state minister of media had not known anything about Chaturika ‘s devil dancing after storming into the State media Institutions. It is hoped somebody will clear the clogged and corroded mind of Chaturuka to make her understand these media Institutions are not her dowry properties given to her by her father , nor the country the dowry property of her father Sirisena alias Sillysena. Just because he is Idiot Amin of Lanka he should not imitate Idi Amin of Uganda.

Even uncouth Namal did not behave this barbarically..

Even Namal Rajapakse who inflated himself with power and pride during the Rajapakse era did not act this arrogantly and stupidly. Even if Namal had behaved this bad , it is understandable because he is after all a people’s representative. Who is then Chaturika the housewife in whom no powers have been vested either by the president father or the people any day ?

She is only known as another crook who during the last three years just because the word ‘president’ was annexed to her father’s name took undue advantage of it to rob and plunder the state. The next question is , who is her father ? He is another who duped 6.2 million people most unconscionably on 2015-01-08 , and now owing to his own un-doings clinging on to a 4 % popularity base like a drowning man holding on to a straw in desperation .

It is crystal clear the ‘broken promises’ father and the robbing daughter duo are now trying to ramify into the State media Institutions to extend their own tentacles of powers , and make those their own exclusive publicity campaign Institutions before the next elections.

As a portentous signal of what is to follow , the unscientific astrology program which was suspended by the good governance government after its advent was recently ordered by the president to be resumed. Now these astrologers after being brought to the state television channels will soon be made to say , Chaturika will be crowned one day like how they said in the past that Gamarala will be King Sakvithi .

Let us teach the mathematics

Let us teach the mathematics the father and daughter duo do not know .At the last February elections , only a meager 4 % were in favor of the father and daughter duo received only a 4 % approval which was a clear demonstration that 96 % are against them .At the last February elections , they received only 4 % support from the people of the country which means 96 % are against. Even if they manipulate and bring all the media Institutions under them , and increase their shows and displays by 500 % , they can win the support of 20 % only which means 80 % are against.

If Gamarala ‘appa’ and his crooked daughter have a way out to change these statistics , we challenge them to prove it.

By an LeN special correspondent .