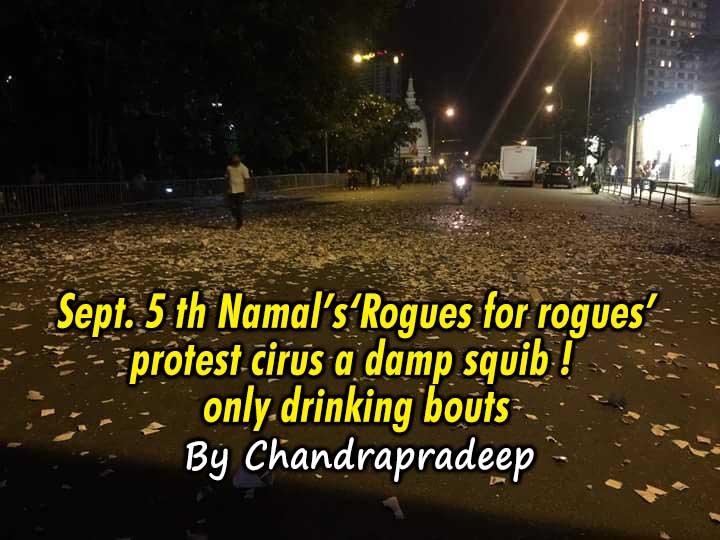 (Lanka e News - 07.Sep.2018, 4.15PM) The so called ‘Jana bala’  protest staged on September 5 th by the corrupt and crooked  Rajapkse family with a view to ‘baptize’ Namal Rajapkse as the future leader , as well as to frighten the judges who are hearing the cases against the countless rogues including  the Rajapakses of the corrupt Rajapakses’  nefarious decade turned out to be  a damp squib. Like how it started from nowhere it ended there without achievement of any aim  or objective . This protest which was better known as  a ‘rogues for rogues ‘ campaign or ‘Horunge Rasthiyaduwa’ while promising  , ‘to overthrow the government tomorrow’ turned out to be a total fiasco.

The ‘rogues for rogues ‘ who bragged that they would get down 200, 000 people to Colombo to join  their ‘Jana bala’ alias  ‘Horunge rasthiyaduwa’ in order  to surround the parliament , Temple Trees and cripple the activities in Colombo , finally could not but admit  only about 100 000 people came to Colombo. Though they said they would see to it the present government  will be packed home ,it is those who participated in the protests  who went home crestfallen. The Machiavellian mendacious Rajapakses  who conspired to create mayhem by sacrificing a life brutally , and blame it on  the government could not implement the gory plan because this conspiracy was exposed ahead.

A fiasco- confirmed beyond doubt….

According to Police intelligence reports , only about 30,000 people could be got down to Colombo in this protest campaign organized  by Namal. Though the  original plan was to transport  the crowd in buses numbering over thousand  , only 275 bus loads of people arrived. Diplomatic divisions  said , about 20000 to 25000 people  congregated.

No matter what , it is common knowledge only a maximum of about 5000 people assembled near the Lake House .Namal Rajapakse and clan chose the Lake House roundabout to hold their meeting  . Owing to this the venue got crowded , while many of his  other Rajapakse vagrants were enjoying- eating and drinking on the by roads thereby  creating road blocks. Finally  Namal ‘s clan could not hold a proper rally.

Truly speaking they were unable to get even a fraction of the crowd they could muster at the last May day rally. This was  because the hope of the party supporters that Mahinda will be the prime minister if the ‘Bud’ won at the local government elections,  had by now  completely  evaporated. .  Namal’s action destroyed  even the strength of the anti government Rajapakse groups like dashing coconuts on the ground .

Dream of Dilith and Reno collapses…

It were the media campaigns of Dilith Jayaweera (Derana TV) and Reno De Silva (Hiru TV) which were most anxious to pedestal  the crooked Rajapakses and make them  ‘Kings’. Both of them are dictated by ulteriror motives : Reno wanted to re – install Mahinda as president to get a presidential pardon for kudu Duminda. Dilith on the other hand wanted to make Mahinda president because of the illicit earnings of Gotabaya which were laundered  via the share markets during the Rajapkse corrupt nefarious decade. Namal Rajapakse devastated all those hopes on the 5 th.(yesterday)

All what Namal could succeed  was getting down this crowd to Colombo and sending  them back aimlessly without any worthy message to the masses  from the  leaders , and simply saying ‘cheerio ‘ to the people  , thereby proving how incapable he is as an organizer. His so called sympathizers were only transported to and fro , and they went back like cattle that were transported  to Colombo  , but rejected and sent back .

At the concluded rally they could not even erect  a stage with a lorry base. Except a mega phone they could not use even a  buffel fixed on the   diki of the motor vehicle . Their megalomaniac leader Mahinda Rajapakse could not even silence the crowd to make his public address only to fade away without making a speech .

Their loud and proud threats that they would lay siege to government Institutions were unavailing .No government nerve center was surrounded ,nor could they convey any worthwhile message to the government  Though they were to protest throughout  the night , only the kasippu drinkers and their thovil  dancing was witnessed at the  Lake House roundabout. There was nothing politically achieved. About 2000 to 2500 were to remain back throughout  the night, yet by midnight   the entire protest circus was over , and the clowns did  the vanishing trick  . They  fled without their gowns as soon as the midnight hour struck.

No youths only drunkards…

If a huge crowd (though there wasn’t such a crowd) is to be got down to Colombo by the opposition with the objective to pressurize and  topple the government , there must be valid reasons , not liquor bottles and hired vagrants. Either  the government should have committed a grave wrong against the people, or there  must be something that stimulates the  people’s enthusiasm    targeting  a forthcoming election .This damp squib had none of these aims. The whole objective and motive of this protest was to disentangle the knotted conflicts within  the Rajapakses’  leadership. In the end , the entire exercise  ended where it began without reaching any goal – starting from nowhere it only got there !

It was very evident the entire protest was dictated by the internal  issues of the Rajapakses and their politicians . The focus was not on resolving the issues of the people. There was absolutely nothing creative nor inspiring  with no attention paid in  that direction.

The number of newly registered youth voters is said to be 1.7 million. Though Namal claims himself as a youth , it is a pity he could not rope in a single youth of this group for his protest . Those who participated were the usual pro Rajapakse lackeys and lickspittles.

90 % of the participants were evidently drunk to the brim. They only smelled of arrack not patriotism. When various individuals of the independent social media  tried to get ‘ voice cut’ every one of them responded every time  with ‘cut voice’  liquor influence. They were so drunk they were almost on all  fours .

It is the chief organizer Namal who brought together all the  drunkards . Hence he  must be ashamed of himself .  He being not  a drunkard , at least  in the maiden effort to baptize  to make him  the future leader he could have  seen to it   his  maiden effort is carried out decently and respectably (his  rackets and perfidies  notwithstanding).

He could have learnt a lesson from Late R. Premadasa’s life at least   because Namal  can never learn  anything virtuous from his own Rajapakses.   Premadasa who was born to low society  parents adhered to his sobriety and sanity all along, and tried to build a virtuous society free from inebriation..

There never had been  anyone who could muster crowds as did he . And it is the low society  people of the cities   who participated in his campaigns. Though certainly it Is not possible to muster a   completely sober crowd , as a disciplined leader setting an example to others he made sure insobriety is not encouraged,.

This was best illustrated during his entire Gam Udawa program shows  which were conducted every fortnight. He completely forbid liquor consumption though some drank on the sly.  Hence Premadasa could curb and control inebriation and drunken behavior.

Therefore it is only an individual having  no people’s  support  who will resort to  gatherng crowd by providing liquor and  arrack as inducements.

One dies and 105 hospitalized

One participant of the ‘rogues for rogues’ (horunge rasthiyaduwa) , took ill and while being transported to the hospital died in the Suwaseriya ambulance. He was a heart patient , reports say. In all there were 105 casualties  transported by ambulances and other vehicles to the hospital .  They had become sick following   consumption of liquor and had   fallen down at various points  , and due to  food poisoning.

The irony of ironies  is , it is the Rajapakses who screamed and shouted against the Suwaseriya ambulances when the government introduced them for the benefit of patients , and now it is the same Suwaseriya services that came to their rescue. A politician no matter how opportunistic he is , should not oppose a good project of a government. It is hoped the Rajapakses  are intelligent and intelligible enough to realize this at least now, and will turn over  new leaf. .

A most important  salient political point must be made known before concluding this article.

During Namal’s entire campaign just one slogan ‘we want a government – Mahinda government ‘ was all that was heard.

If that is the one and only objective , without wasting national wealth and  without making the people to suffer on the roads , Mahinda Rajapakse could have resorted to one simple thing . :H e can  topple the government 6 months before its full term is completed , and take over the reins. That is by a  political  methodology   strengthening the country’s Democracy.  The methodology is simple , the members of the Alliance including Rajapakse supporting the 20 th amendment tabled by the JVP in parliament , and providing the two third majorityin parliament . Unbelievably only Mahinda’s  groups which are not supporting it at present. All the other parties are in support.

If the 20 th amendment is given support , there will be no executive president appointed on the votes of the people. It will only be a president sans executive powers appointed by parliament .In that case the present  power pickle would be over , and the powers will be vested with the parliament and prime minister will be  the head. In that event instead of the scheduled presidential elections on 2020 -01-08 it will be the general elections.

Hence ‘if they want ‘ a government and a Mahinda’s government’  what they should  do is , support the 20 th amendment ,and  do their best to form a Mahinda government on  2020-01-09 ,shouldn’t they ? There is nothing militating against that. Based on what theory can one say  , when the next government is being formed Ranil Wickremesinghe of the UNP will be the prime minister again .

Without following  that what are the Rajapakses trying to demonstrate and accomplish  ? I t is therefore crystal clear  they want not only a Rajapakse government but a ‘despotic government’ which existed during the Rajapakse corrupt nefarious decade.  They want a corrupt despotic regime again and not the  power under any circumstances which would render them  accountable to the parliament  .

We who are for genuine  patriotism swear hereby , never will the plans and plots of Rajapakses work .There is no room for a dictator to rear  his head again even if Namal gets crowds  down  to Colombo until his hair has turned  gray and makes them roam the streets while performing his own  clownish  acts .