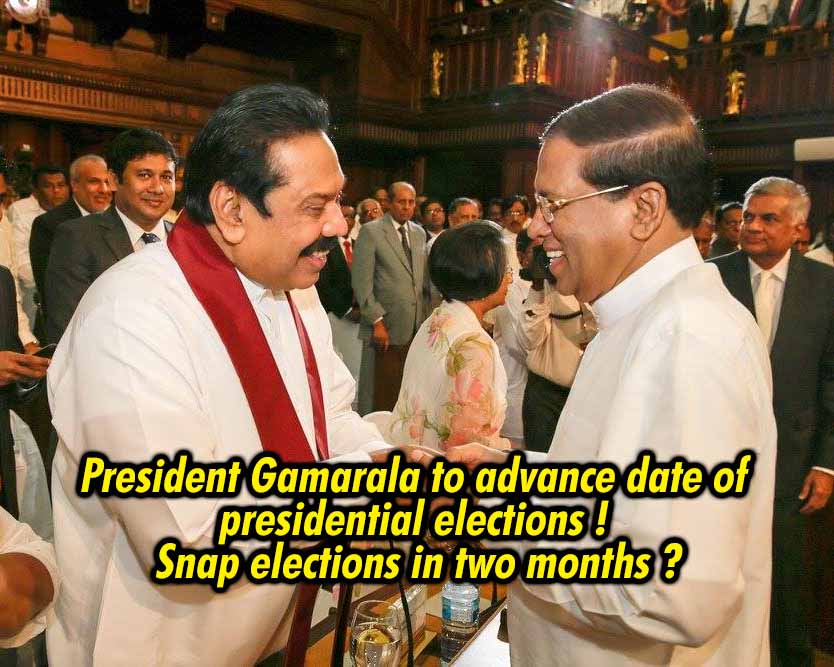 (Lanka e News -02.Aug.2018, 9.00AM)  By virtue of   the legal rights vested in  president Gamarala , the latter is trying to go for presidential elections in 2019 and not 2020 ,according to reports reaching Lanka e news inside information division.

The UNP faction  which is currently most strong within the consensual government is right now  most vigorously carrying on its projects with assiduous ardor  : Gamperaliya , generating 100, 000 entrepreneurs , augmenting the welfare activities of the education and health services are some of them   ,and if it maintains this momentum  it is going to be most popular among the people .

President Gamarala who is best noted for running with the hare and hunting with the hounds ,  is harboring  the  fear that the UNP will become popular , and also  being fully aware he will  definitely  not be the UNP presidential candidate , has entered into an agreement with the Rajapakse regime to advance the date of presidential elections, and is taking measures in that direction , based on reports reaching Lanka e News inside information division.

President Gamarala who is always led by the most misled NGO crook and political outcast Shiral Lakthileke has offered another ‘D -rope’ to gullible most fallible Gamarala  . He had advised Gamarala because the Rajapkses are having a power struggle within and are without a suitable presidential candidate , Gamarala should step in to fill  that vacancy .

Hence if Gamarala is to be made the presidential candidate of that camp through Mahinda Rajapakse by Gota exerting pressure , and with that vain hope it is possible  , Gamarala has got ready  to advance the presidential elections to 2019 from 2020 so that the Rajapakse camp can clinch that advantage .

Both sides are now  exchanging views , and if Basil who is bitterly opposed can be won over , Gamarala is prepared  to make the announcement   in October  and hold the presidential elections in January 2019.

Be that as it may , it is a well and widely known fact it is  India which takes the  decisive stand and contributes heavily  as regards the power balance in SL . Sadly , based on information reaching Lanka e News inside information division , about two weeks ago , it had arrived at a carefully  considered conclusion  that president Pallewatte Gamarala is most undependable  and untrustworthy .