If only 19 prisoners are handpicked for execution it is akin to Gota’s mass murder of Welikade prisoners ! No law permits that 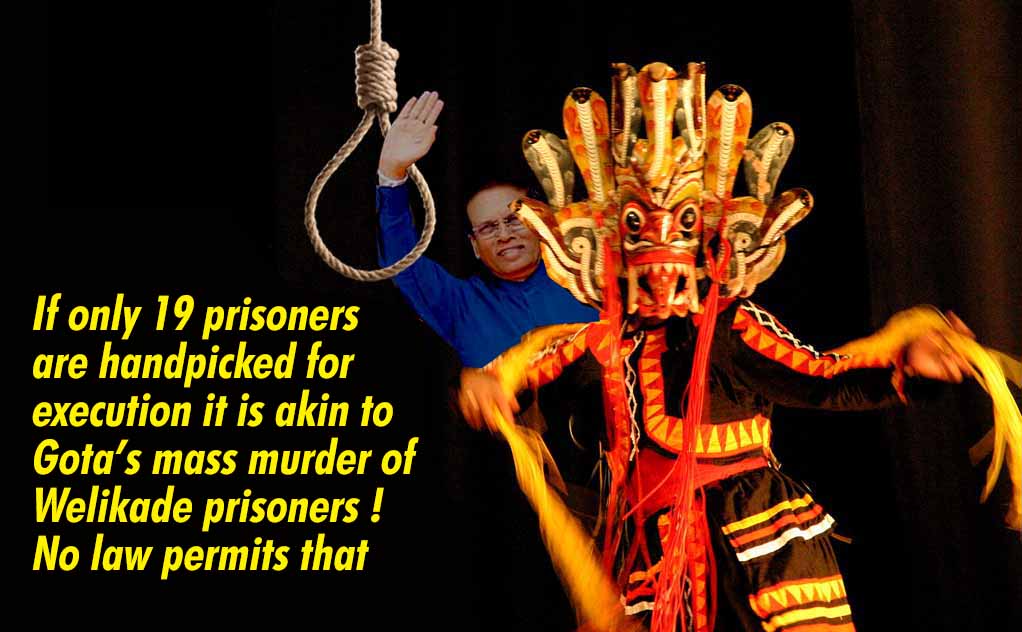 (Lanka e News -30.July.2018, 7.00AM) The cabinet decision conveyed at the media briefing Wednesday (25) confirmed that the 19 heroin dealers in jail shall be executed .To president Pallewatte Gamarala implementing the capital punishment  is more important  than the GSP plus concessions which have already  proved to be a  boon to the country . Gamarala’s stubborn as a Mule attitude  is because his son is addicted to drugs  .This is what has  made him  most vindictive and venomous  against the drug dealers while showing  least concern for  the country. It  was reported again that the cabinet has given unanimous approval for the president’s decision.

However following the cabinet decision yesterday , to us as civilized humans a number of questions have sprung up to which answers have to be sought …....

It is a well known fact even the barbaric practice of pounding infants in mortars was lawful in Sri Lanka during the period of the grandfathers and great grandfathers of the present elderly generation . Incidentally , the grandfather of the writer was born in 1895.

When   the infant of Ehelepola of Kandy was killed by pounding in a mortar in 1815 by the mother of the child who was made to do it, the great grandfather of the writer was a youth. After that cruel episode when King Sri Wickrema  Rajasinghe was taken as prisoner by ship by the British  to Goa ,his physician asked the King , why was such a cruel punishment meted out ?

The king very simply answered , the Sinhala rules of the kingdom  were not made by him , and he only implemented the decision approved by the then cabinet  in accordance with the rules ( Read Dr. Marshal’s diary ) .

In the past people were killed according to  whims and fancies under various pretexts : Those killings included  the ‘death to traitors’ label fastened on the victims  by the Left after  using the word   ‘discard’ (iynkireema). ( The word ‘discard’ was coined by Rohana Wijeweera. Interestingly , the writer heard this word for the first time from the mouth of Wijeweera).

When  president Gamarala learnt his son is addicted to drugs , he panicked and got   agitated  so much so that he  is getting ready to kill 19 prisoners charged with drug peddling. Now it is being  said  the  unanimous  support of the cabinet of the consensual government has been obtained for this.( Coincidentally , it is noteworthy it was the  cabinet at that time which was the cause of embarrassment and humiliation of Sri Wickrema Rajasinghe too ,who like a beast  killed infants within jungles)

If the government is to introduce death penalty as a matter of policy , that law should apply to all equally and indiscriminately. A civilized government cannot therefore save the lives of  only those it fancies , while  picking  and choosing for killing   those whom it resents.

Yet   based on  another news report it was most clearly enunciated   by the cabinet spokesman, when implementing the death sentence delivered  by the courts , only some drug dealers are to be executed  ,  that is only the 19 culprits named by the police intelligence division shall be executed.

This is unlawful, a wrong method and unethical.

According to the country’s laws , after the death sentence is delivered by court , it is implemented only when the president signs it and the laws have laid down the procedure for that. He cannot therefore pick and choose those sentenced for signing.

Before the president places his signature approving  the death penalty of a particular individual he must call for reports from   four ‘sides’and get their unanimous  consent . The four are : the  chief justice  , the Attorney General , minister of justice and the panel of judges or the judge that delivered that verdict.

Hence, though the court delivers a verdict of death sentence , four more parties should confirm that the verdict is correct . It is  then and only then the president can give his consent to  the death penalty.There is no other procedure  than this under  Sri Lankan laws. Therefore    the  president cannot assign this task to another committee as revealed by him recently at the Moragahakande reservoir  .If he wishes to do that there must be a constitutional  amendment or a new enactment  shall   be passed.

In the circumstances , if death penalty is to be implemented in accordance with what the cabinet spokesman revealed  , that can only be done  only on the lines of the procedure in the aforementioned paragraph , and there is no other option.

The question is why neglect to state this….

What is being said is , capital punishment shall be implemented against the 19 prisoners because they are continuing to  engage in drug business while they are already  serving sentences for drug offences  in jail. This premise  is weird and most rudely shocking  for  while saying this , those who are serving death sentences for murder are not being executed !

A  fresh case ought to be heard.

Under these  circumstances , it is nothing but fair that a fresh case is  heard against those who have allegedly engaged in drug deals while being in jail ,  and in addition a  separate investigation is carried out. In that event without any doubt all the groups including  prison officers who aided and abetted the drug dealers within prison shall also be incriminated  when new charges are filed. Otherwise than that nobody has any legal right to execute anybody summarily. What is important is ,  without singing stupid  senseless bailas,  implement the death  sentences passed on all those found guilty  without exception in accordance with the law.

On the other hand, if only 19 individuals are to be executed because the police information service wants to, it is akin to Gotabaya Rajapakse sending the forces unlawfully into the prison and killing  a group of prisoners including those charged with drug offences , as well as  the murderers who allegedly killed the Kotte Vihara monk when they went to the Vihare to  rob the sword at the behest of Rajapakses.

In case it  is another prisoner ( and not those on whom death sentence has been served) engaged in drug business within prison  , that is  , he is an individual who  is in jail serving a sentence of about 15 years , and  embarks  newly on drug business while being  within prison , what has  this group   for execution  got to say?

In case if it is  a prisoner who engaged  in drug business other than the group of  19 prisoners referred to  who are sentenced to death  , what is the position ? If the  prisoner who is facing charges of robbery or  any  other and jailed for 15 years or thereabout , starts drug business  newly while in jail , are these ‘gentlemen’ clamoring for  capital punishment  going to implement the death sentence against him? How can death penalty be implemented without a trial ? If not , is he going to be permitted to go on with his drug business while he is in jail? Surely these  ‘gentlemen’ must furnish answers to these questions.

It is to be noted all the prisoners on whom sentences have been delivered are under the custody of the courts . The prison officers are only protecting that custody .If the accused who is meted out punishment is not rehabilitated , and continues to commit the offence time and again , that responsibility should be shouldered by the courts and the prisons, in  other words , the government.

In the circumstances the civilized  citizens therefore cannot permit the president to wreak havoc simply because he wants to  earn cheap popularity or  pay off a personal grudge taking advantage of a responsibility that has  not been duly discharged by the government.

This is most imperative because if a local ‘Gotler’ alias ‘Hitler’ emerges and comes to power he can use this pernicious precedent to swell his already swollen head to the point of explosion and lead the country into  a volcanic eruption.  .

President stubborn as a Mule: Capital punishment even at cost of GSP ; to kill 19 based on specific choice!