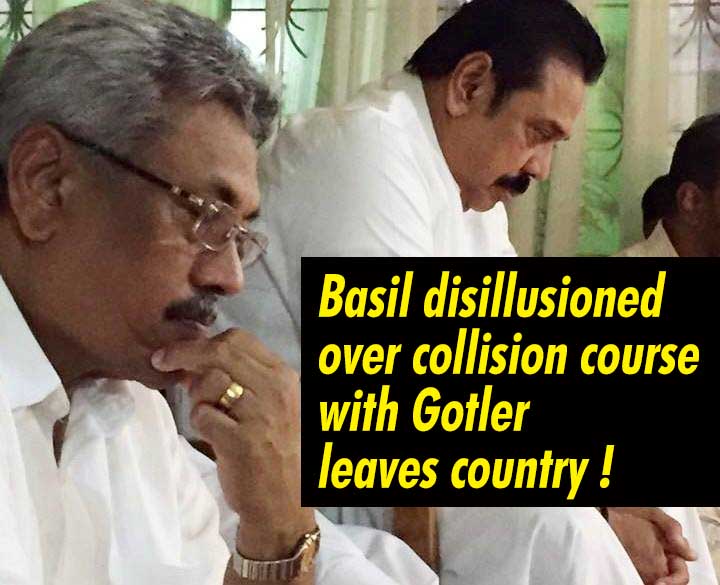 (Lanka e News – 26.July.2018, 10.45PM) Basil has already secured the court permission in this connection . A spokesman for Basil revealed the latter has decided to be out of the country for 3 to 4 months.

Opposition in a quandary  - Is opposition  to become pro Rajapakse , democratic or extremists ?

The  controversy has deepened so much so  that they say openly , as the individual named by Mahinda Rajapakse is decisive , there is no   democracy .

In such  circumstances  there is no  political committee or district committee or family committee and it  is primitive without any democratic character. If  the name proposed by an individual is decisive , then what is fair and just about it?  Even in a family the decision is that of the mother and father  , and decision  of a single individual is not implemented .  If that is to happen  the inevitable result is divorce.  Even within a   death donation society formed by the villagers, there exists no such stupid tangles or struggles  for leadership.

No matter who says what , the opinion of the  Lotus  bud group that they have no truck with the Bandaranaike Radalayas (noble)is a positive sign of Democracy. If the SLFP is to rise again or as  Lotus bud  , it must show positive signs of going beyond the confines of democracy  which the UNP  has offered  to the people. Instead , seeking to glorify a single  individual and boost his image is a most primitive  move .Only a few in the opposition have understood that, others  believe only  in winning at coconut scraping   , and dashing  coconuts..

When  ‘Gotlers’ are trying to use retired personnel of the forces , and if the leader of the Lotus Bud Basil Rajapakse without facing  them is to leave the country allowing them to challenge those who are  even little democratic , that is certainly not going to confer even  minimum benefit on those who are pro democratic.