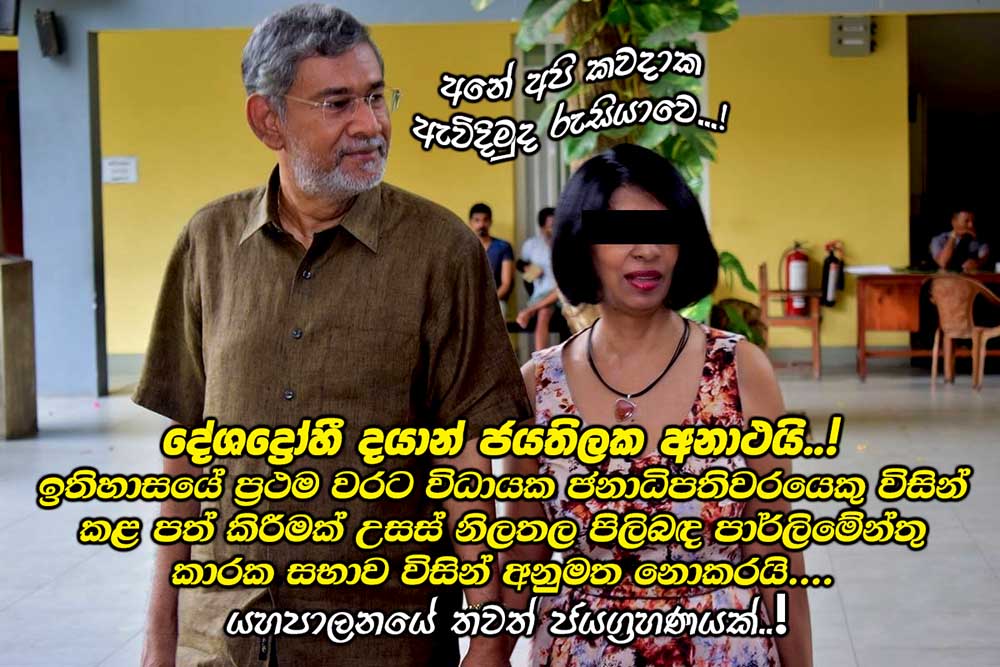 (Lanka e News – 20.July.2018, 11.45PM) For the first time , the parliamentary committee on  high posts  decided to question   the president again on an appointment made by him , and has  therefore postponed the ratification of that appointment.

This welcome move is  considered as a salutary  outcome of the curtailment of the executive power of the president under the 19 th amendment , whereby  that   divested  power is now vested in the parliament .( Earlier on the  select committee could only review cabinet appointments but did not have the power to review the appointments of the president). This certainly  constitutes a   triumph of  the people’s forces on January 8 th 2015

When the parliamentary committee chaired by the speaker Karu Jayasuriya met Tuesday (17), the appointment of the  most abominable traitor Jayatileke was taken up , it was realized that over a hundred civil organizations and members of the intelligentsia had made objections to the appointment  in writing to the Committee. In addition , several others too had sent in written objections against  Jayatileke’s appointment ..

By virtue of the powers vested in the select committee Jayatileke was summoned before it. Bimal Ratnayake of the JVP who is a member of the select committee explained the objections raised by the organizations and the charges against Jayatileke when the   ‘nutty professor’ of  a rare obnoxious breed dismissed it saying  , ‘ what is told by the civil organizations cannot be taken into consideration’

Rejecting  this answer  ,Bimal and Vijitha Herath of the JVP , along with John Amaratunge and  Eran Wickremaratne  of the UNP told the speaker that  this appointment shall be rejected . Finally , the committee decided against this appointment , and to inquire  from the president again,   the reasons for the appointment.

The nutty professor following this incident made bizarre comments on his facebook when answering one Dilki. Based on his own comments alone his contemplated  appointment merits cancellation.

His  weird comments were  as follows  …

To become the Russian ambassador  he can wait until Mahinda Rajapakse comes to power,  and he can hold on for 18 months. The incumbent president Maithripala Sirisena  is a successor  of Mahinda and he is pushing  forward  the latter’s policies.  Dayan  even went  further and questioned , which is the ruling government  under  this reign ? Which is the government ? Which is the country?  and added  he does not know anything .

No matter what cock and bull story the self seeking political opportunist Dayan is relating  , this is the first time in SL the parliament committee on  high posts has not approved the appointment made by the executive president .The decision taken by the committee represented by all parties based on justifiable and valid grounds certainly deserves  the plaudits and praise  of the pro good governance masses.

The present parliamentary committee on   high posts is comprised as follows :