MaRa’s title deed transfer forever surpasses even the up country betrayal in 1818 in favor of the British ! 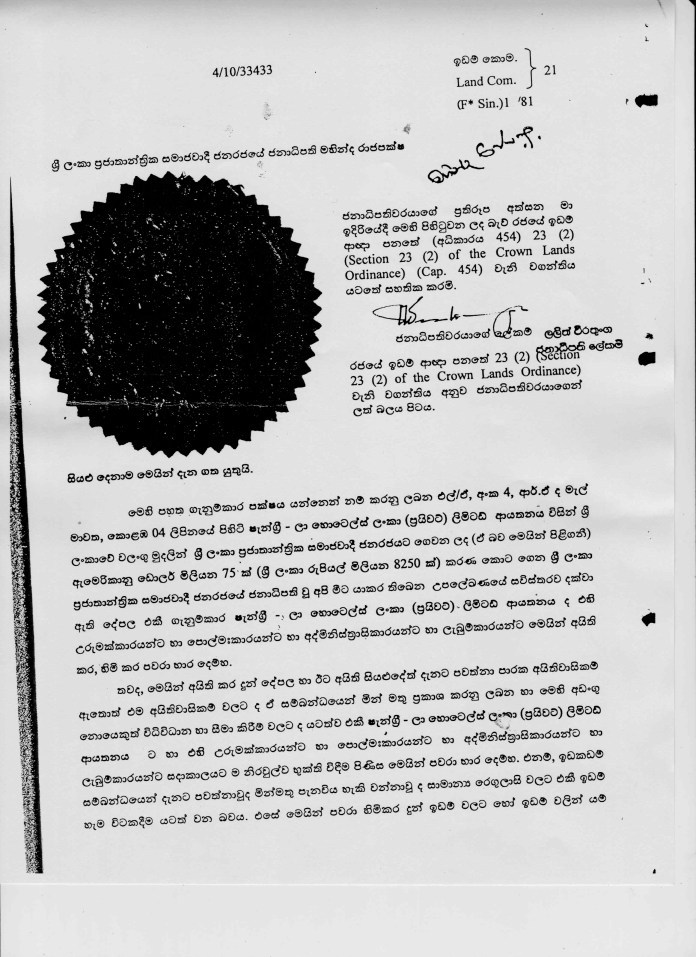 (Lanka e News – 20.July.2018, 11.45PM) Kurunegala district M.P.Mahinda Rajapakse alias ‘Medamulana MaRa’ the self proclaimed leader of the Rajapakse generation has betrayed the country on a scale even surpassing  the most infamous upcountry agreement signed on 1818-03-15 whereby the entire country was turned into  a colony under Britain, based on a discovery made by  Lanka e News.

In the upcountry agreement nowhere was it stated ‘the recipient gets permanent clear title by the transfer to enjoy ownership forever ’ . But in the agreement of Mahinda when betraying the country by selling the army headquarters and land situated in the heart of the capital city Colombo  to the Chinees Co. Shangri La  , unbelievably such a clause is included. ( Proof  in respect of both agreements are herein)

This land is not in the country’s map ,yet the rascally cardboard patriotic rat  Percy Mahendra Rajapakse has provided a road to it in the capital city , and that road’s name  is Baladaksha mawatha.

Beilieve it or not! Mahinda Rajapakse who screams from roof  tops that he rescued the country and is  a patriot had sold 2.4361 hectares of land including Baladaksha mawatha for a paltry US dollars 75 million while also incorporating the clause ‘ownership is transferred to the Shangri la hotels Lanka (Pvt) Ltd. ,its heirs , administrators ,  recipients and executors ’ in the agreement.

It is significant to note , even in the up country agreement signed with  the British imperialists  when  SL was brought under their  rule such a disgraceful despicable detestable betrayal was not committed via the agreement.

In the agreement signed by all the leaders of the up country at that time to make this country a colony of the British , nowhere was  it stipulated ‘the title has been transferred permanently   to enjoy ownership forever ’ nor is there a clause to that effect. The up country leaders at that time had not made such an atrocious  national betrayal in favor of their British rulers as did the Rajapakses in favor of Indian Shangri la hotels.  . If by chance there was such a monumental betrayal by the up country leaders in their  agreement on the same lines as that of MaRa the so called (cardboard)  patriot and country’s ‘savior’ , even today SL will not be free .

In the past such was the betrayal of the up country leaders , but in the present , the traitorous murderous  Mahinda Rajapakse and his blue brigand via  the clause ‘title permanently  transferred to enjoy ownership  forever’ have committed the worst betrayal ever in recorded history.

In the circumstances , it must be probed how these notorious Medamulana Rajapakse blue brigand rogues secured the legal right without parliamentary permission to betray this country so outrageously and monumentally ,in order that  these betrayers are meted out punishment .  Sadly , this task cannot be accomplished  by the present effeminate (ponna) , hypocritical , feelings- less  ,policy-less leaders and an infighting government whch is running down the government instead of running it , but rather only  by a truly people’s government  acting in the best interests of the country  .

The copy of the deed signed by Mahinda Rajapakse and his secretary transferring the  most valuable land of the motherland to Chinees Shangri La hotel owners permanently and forever , and the link relating to the up country agreement   signed long ago are hereunder  to enable the viewers  to read them .

The monumental ruthless betrayal of MaRa is contained in  the images , and upcountry agreement can be read by clicking on  the link below. 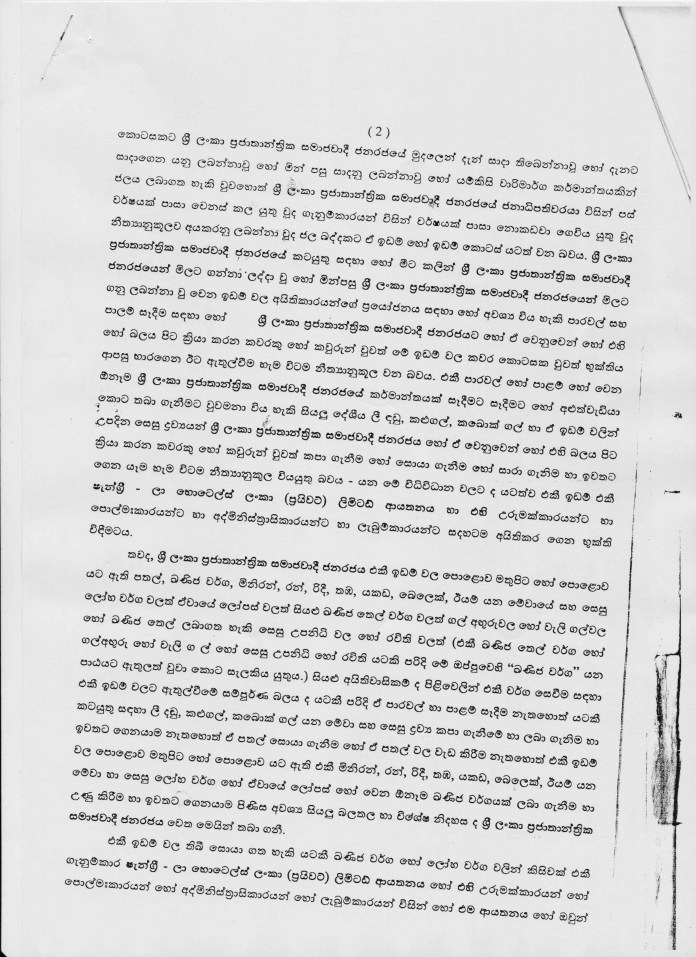 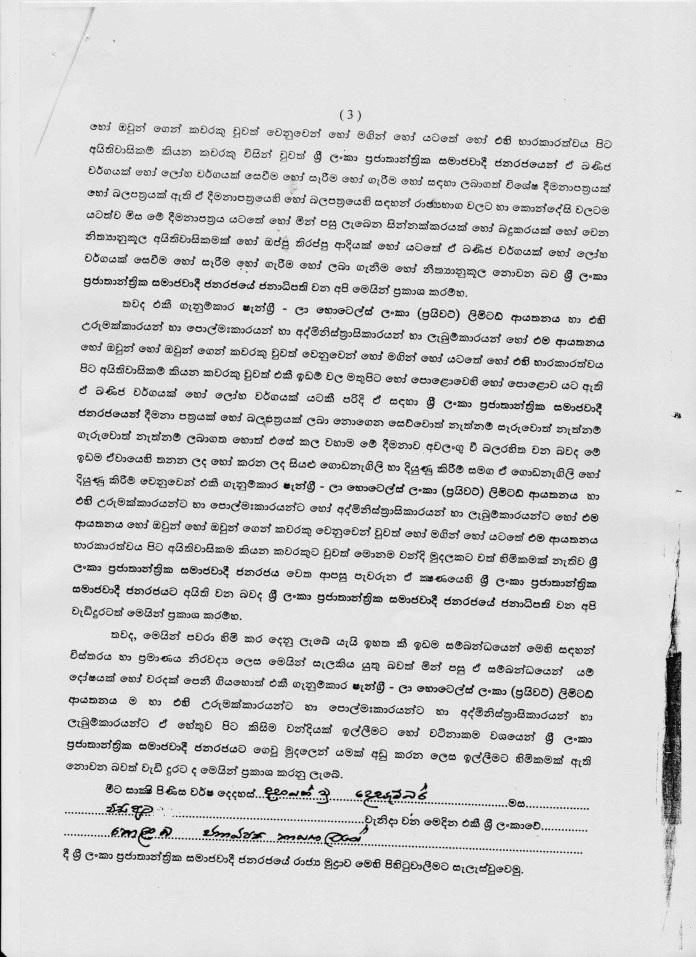 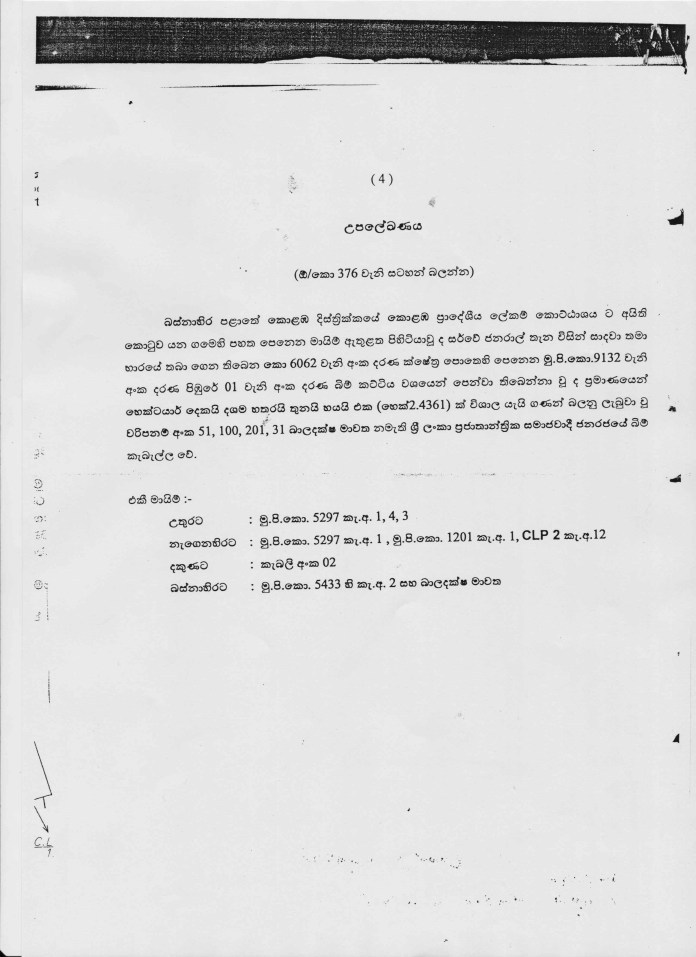