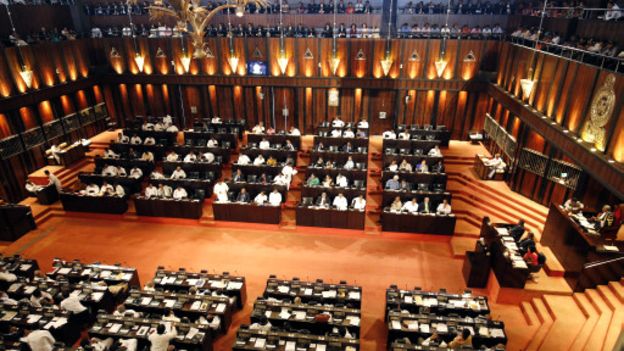 (Lanka e News – 20.July.2018, 11.45PM)   It was apparent the debate in parliament of the UNP yesterday (19) pertaining to the receipt   of a colossal sum of US dollars 7.6 billion by ex president Mahinda Rajapakse from the Chinese harbor Co. during the last presidential elections based on New York Times report was lacking the enthusiasm it merited.

Though the debate was to start this forenoon and to continue until 7.30 p.m. the office of the government chief whip did not take steps to ensure the presence of the senior UNP speakers. Only Kabir Hashim and Akila Viraj Kariyawasam were the only senior ministers present to make speeches. .

From the moment the parliamentary  sessions began , the joint opposition was determined to sabotage the debate assuming that the UNP seniors were present . The joint opposition (JO) and the  seniors of the  group of 16 too spoke with the objective of disrupting and disturbing the proceedings while also  claiming there was no quorum .

The debate which was scheduled to commence at 11.00 a.m. was delayed until 11.50 a.m. due to the JO raising irrelevant issues regarding regulations . These  saboteurs disrupted  the debate while  the government whip office  automatically  contributed to the dilution of the proceedings.

The UNP had a splendid opportunity to score all the plus points at the debate which was not attended by Mahinda Rajapakse , but because the government whip’s office did not take the necessary measures , the entire debate ended deflated.

Except the chief whip Gayantha Karunatileke of the government whip’s office , others appointed to assist  him were  officers of the Rajapakse era . It is why , the debate had to end this way , employees in  the parliament  lamented  while pointing out  , the government carrying on even  to this extent while having all the Rajapakse lackeys and lickspittles in their midst  is a matter for surprise .