JHU Gampaha district ex M.P. arrested on sodomy charges ! He has committed this crime on 5 samaneras earlier too !! 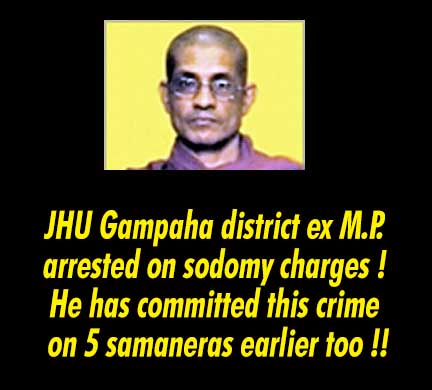 The victim had been  brought to the temple to make him a monk . However instead of doing that Aparekka the chief monk of the temple had done something else – committed sodomy on  the boy every now and again for about a week. The boy who finally escaped from the temple had gone back to his parents and related what this rascally monk  did to the boy. The sex starved Pungyanandaya was arrested  after the parents of the boy lodged a complaint with Mirigama police.

The victim was admitted to Mirigama base hospital , and subsequently transferred to Gampaha district general hospital for further investigation.

What is more shocking than this is , this Pungyananada Thera has committed sodomy on five samanera (young) monks in the age range between 10 and 14 years in 2011 too   , and he was trapped. The young samaneras had made statements  to the police that this rascally sex pervert Pugyananda  comes in the night , frightens them  and commits the crimes. In courts the accused  admitted he occasionally sodomized  the samaneras , and had pleaded guilty.

Yet , there is no mention of the  punishment that  was meted out to him then. Moreover there are no reports  that such monstrous child molesters  in robes  had been punished by the Buddha sasana order for their unpardonable crimes and sins.  No wonder these sex starved scoundrels are continuing to commit the same crime again and again after coming back to the temples wearing the sacred robes .It is a pity some elders are even blind  and dumb to these crimes committed on innocent growing children . Not enough allowing these robed rascals to indulge in these disgraceful criminal activities , these elders  even worship and make religious offerings to these religious humbugs .

If there are no pure Buddhist  leaders of the religious order  to disrobe these rascals and  chase them out with a view to  save the Buddha sasana from further degradation and disgrace  , at least the people must take upon themselves that  blessed task.