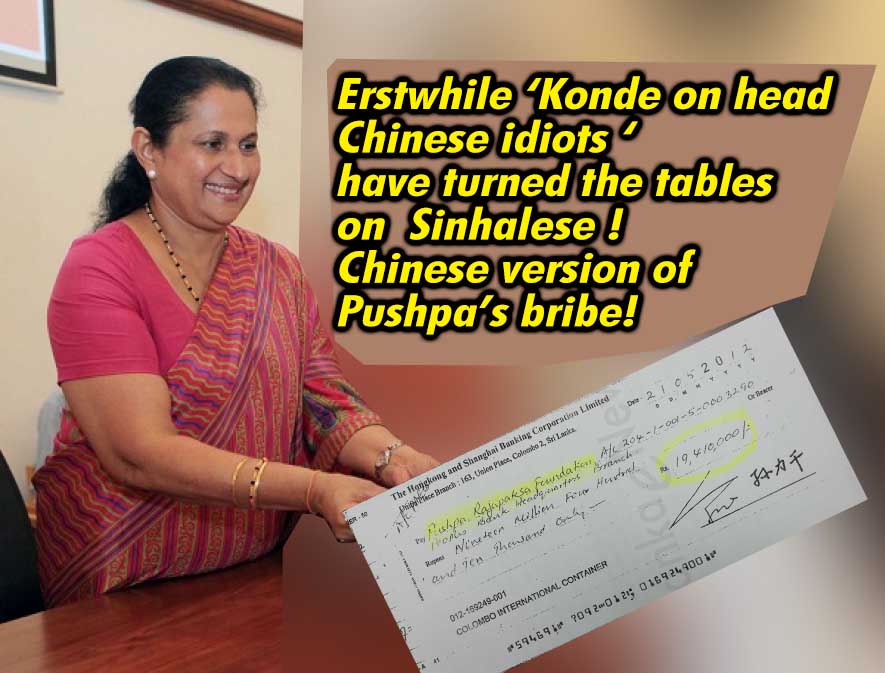 (Lanka e News -17.July.2018, 11.30PM)  ‘Go and tell that to the konde (lock of hair) on the head Chinese’ is a common Sinhalese saying   because  Chinese were  considered as fools believing any lie that is related. Though that saying applied to the Chinese of the past , in the present it is the Chinese  lying profusely to the Sinhalese having  turned the tables on the Sinhalese who are now  treating   the latter  as konde on the head morons.

Following the exposure of the payment of Rs. 19.4 million ten thousand rupees to ex minister Basil Rajapakse’s wife Pushpa  by the Chinese Co. CICT which undertook the contract to construct the Colombo South harbor, the CICT Co. issued a notification.

In that notification it is stated , the sum of Rs. 19,410,000.00  (US dollars 150,000.00) was paid to Pushpa’s Foundation (Pushpa Rajapakse foundation)  with the objective that that sum will be used to build houses for the low income earners , and it was not a bribe. Besides that payment has been incorporated  in their audit reports.

This sum was gifted  a long time after the agreement was entered into to build the Colombo Port South terminal, and even by that time the construction activities had begun, the CICT notification went on to elaborate.

But the question at issue  …..

What is most crucial is , the  payment that was  made to Pushpa being incorporated in the expenditure side of the audit report of the company  pertaining to the Colombo south port construction. That clearly means it is the people of SL who have to repay that amount inclusive of capital to China.

Ordinarily whenever an individual or a company makes a gift , that is done out of their profits .The government audit therefore  in its audit query had rightly and justifiably questioned the inclusion of that payment in the expenditure side . After  having considered  it as a fraud  , an investigation was commenced which is now  on going.

The other story of the Chinese is most perplexing ..

The Chinese  say, that disbursement was made to Pushpa to be used for construction of houses for the low income earners.  ‘If so , you Chinese please show us  where our Pushpa built the houses ?’  We only know Pushpa and Basil got together and built a super luxury mansion for themselves in Malwana, and we also know too well about what Pushpa and Basil are capable of doing – certainly not building houses for the low income earners! Going by their antecedence it is a well and widely known fact they only fill their own coffers, selfishly  serving  themselves and not the country let alone the low income earners.

The Chinese by giving bribes have not only compromised the interests of the Sri Lankans , but have  driven the Sri Lankans into  dire straits for it is the latter who  have to pay for the sins committed by others and the illicit gains made by Pushpa. And now  in the second round the Chinese  are trying even  to  mislead  the Sri Lankans.

A country can be big or small. But corruption is corruption  no matter where it takes place. Therefore the rulers of a small country should know when crusading against corruption they should not make the smallness of the country an  issue or a barrier .

It is well to recall  when China gave  many millions to ex minister Basil Rajapakse’s wife Pushpa under most corrupt circumstances to construct houses to  low income earners , India on the other hand out of its own funds is building one hundred  thousand houses for the low income groups of the north and the estate labor population . It is also unforgettable that while Pushpa and Basil have built a ‘palace’ in Malwana for themselves , it is the people who have to repay the Chinese loan in full inclusive of the loan amount misappropriated by Pushpa .

Check leaf proof etc. to prove payment of Chinese Co. to Pushpa; that amount plus interest thereof must be repaid to China !

Not enough the Rajapakses’ pillaging – Basil ‘s wife too collects Rs. 20 million from another Chinese Co. !