President requesting to deport LeN editor is a joke without investigating LeN arson and disappearance of Ekneliyagoda; Shiral is a jailbird who attacked democracy with stones and missiles! 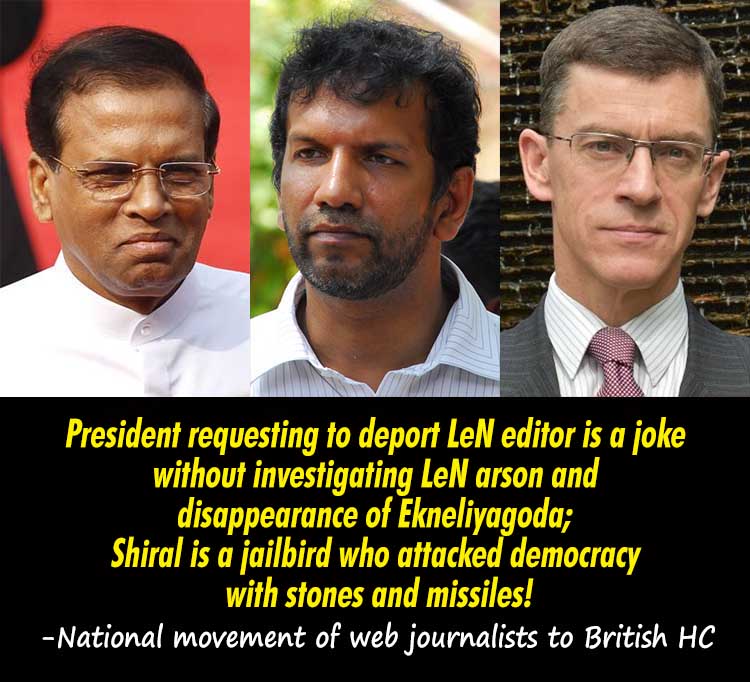 (Lanka e News -12.June.2018, 11.30PM) Without conducting any investigation into the arson that was committed on the Lanka e New portal , or into the abduction and disappearance of its cartoonist cum political columnist Prageeth Ekneliyagoda , the president making a request to Britain to arrest or deport the Lanke e News editor is the biggest joke of the century specially because he is the same president Gamarala  who came to power by making  loud and proud promises solemnly and unrelentingly that he would end the media suppression and oppression which raged under the last regime, the National movement of web journalists have stated in their letter addressed to the British High Commissioner

Shiral Lakthileke who along with the president made the request to the British High Commissioner to arrest or deport the Lanka e News editor was a criminal  who was arrested and remanded earlier on based on the following charges:

Criminal intimidation , criminal trespass, and unlawful assembly over the stoning and attacking of a  main Democratic Institution – the UNP headquarters , the National movement of web journalists had highlighted  to  the British High Commissioner.

The National movement of web journalists had urged the international community therefore to investigate the murder of about 250 journalists during the last two decades without allowing president Sirisena  to indulge in empty rhetoric  and brags.

His Excellency of the ambassador

Further sundaytimes reported, Mr. Shiral Laktilleka too presence for the session. It is worth to note Shiral Lakthilaka  is a  person who was remanded on charges of unlawful assembly, trespassing, and criminal intimidation thus cast stone to the UNP headquarters, the biggest democratic center in the country.

During dark regime of Rajapaksha’s, although Lankaenews office burnt down, Prageeth Eknaligoda whom cartoonist and political analyst reported missing, To date No conclusive investigation been taken.

Facts being so,It is very ironical Sri Lankan President requests Britain to arrest or deport editor of LankaeNews, More ever Sirisena whom promised to end an era of draconian restrictions on the country's media.

We are nothing  but well witnesses  for murdering of 250 plus journalist during last two decades. It is a tragedy that staying our nation and international community  as a mute spectator cover their eyes, tied hand back.

The National movement of web journalist, calls up the international community, Not only requests President Sirisena to stop the charade also demand conclusive investigations into attacks against the media. All inclusive nothing but safe guard our press freedom.