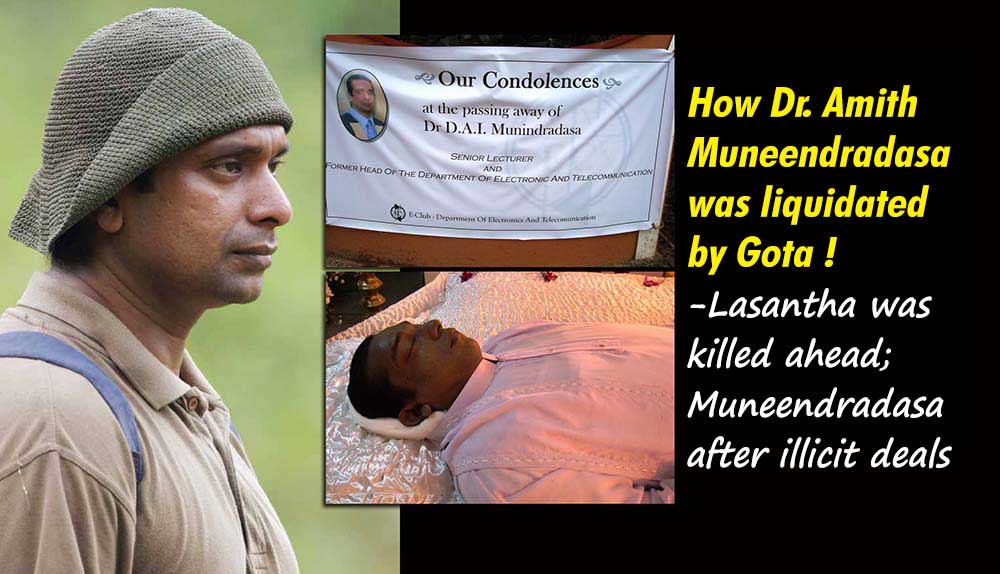 (Lanka e News - 12.June.2018, 10.30PM) How IqbalAthas was subjected to murder threats  to suppress the MiG jet scam of Gotabaya was revealed in the previous article of mine. Some others too getting panic stricken  and overwrought by this is not a matter for surprise , when  cold blooded murders and robberies of Gota are being exposed with cogent evidence .Even in respect of the last article  last week about Gota there were responses from the pro Gota faction.

We have only one thing to tell them in plain language : Truth declares itself  some day  no matter how much it stings .  The truth however bitter cannot be hidden forever.

What prevails in this world is truthfulness and  not falsity. The empire that is built on falsehood cannot last long –it  finally crumbles. The upheaval of 2018- 01-08 is a perfect illustration testifying to this truth.  If the present rulers seek to conceal the truth they too will perish and the truth will triumph. Therefore it is best that Gota and his clan be warned to face the truth  fearlessly   as there is no escape from that.

Who is the Gothaya (barbarian) who brutally destroyed the prestige of the forces ?

The precious prestige of the three forces which was maintained for a long time was violently destroyed by Gotabaya Rajapakse and by no other. The war hero , a four star General who won the war was dragged out and  incarcerated . Dozens of Generals with stars who committed themselves to their tasks for 15 to 20 years were most unceremoniously sent home.

Gota  used the precious public funds to maintain soldiers to hunt down his personal enemies and transformed the  intelligence division  into another underworld den. Unbelievably , until the SLFP gen. secretary mounted the stage of the UNP  he did not know anything about Gota’s ‘intelligence division’ . By these articles , it must be emphasized the prestige of the forces has not been dented because there is no intelligence force in SL which betrays or destroys.

Who is  Dr. Amith  Muneendradasa ?

Before the unstoppable tide of the Tigers , the citadel  of the government forces began to crumble one by one, the supply routes were blocked and  the forces were cornered. America and India   also halted the supply of war  equipment to the forces and the government’s weapon transactions took place through intermediaries.  It is amidst  this the Czech government multi barrel weapon transaction took place .The multi barrel weapons were obtained from Czech government through  hired Russian planes.

The Mossad spy network nucleus is is located within the territorial limits of Azerbaijan    , Iran. It was therefore difficult to transport even a nail through Azerbaijan  on the sly. The transit airport of Hired Russian plane which carried the multi barrel weapons   was Azerbaijan    Baku airport. When the plane landed there , a chain of   mysterious events followed. The plane that was hid in Azerbaijan  Baku city Airport , emerged after two days.  By that time the electronic circuit of  ‘center command unit’ which was the heart of the multi barrels has been damaged..

By the time the multibarrel  weapons were unloaded in SL that was just a mass of steel. If those were to be restored  , either a new center command unit had to be introduced (which is almost as costly as purchasing a new weapon)  or  those had to  be dismantled , and the inactive circuits refurbished.

It was therefore a great  blessing to the nation  to have such an  expert  as Dr.Amith Muneendradasa.

Dr. Amith Muneendradasa  is a graduate of the Moratuwa University  ,and possessed of  a doctorate.  He was the official proferring  technological  advice to the forces of the government  when purchasing arms.

Amith successfully restored the deactivated weapons to the original condition. He toiled for 6 full days working day and night without sleeping to accomplish this task. Janaka  Perera who did not  delay one minute took the refurbished multibarrel weapons to the security arena. It is thereafter the tidal wave of the Tigers could be stopped. But for  Amith  the history we are relating now would have been different. Amith’s name deserves to be etched in golden letters in the annals of history.

Besides , a skill display of the aircraft was also not made , the Air Force report further stated.

Gota on the other hand exerted unrelenting pressures on the Air Force towards this transaction. Gota planned to conclude the transaction in the second quarter of 2007 so as to line his pocket with many million dollars commission. Since 1991 it was Amith Muneendradasa who was the official providing technological advice to the government’s forces when purchasing weapons.

Amith however was absolutely opposed to this deal . He said he cannot sign in favor of a transaction which constitutes plunder of public funds. But because of the intense pressures  from Gota and the defense ministry, on  6 th June 2007 , Amith had to travel to Israel.  After landing in Israel he took lodging in ‘Tel Aviv Marina ‘Hotel.  The fate of the U.A. V. deal was hanging on Amith’s signature.

The local representative in this transaction was Arjuna Gunawardean another Gota’s sidekick. ‘Protect Risk management solutions Ltd’ was the company he represented which was a fake Co. in Britain.. This Co .  was another fake Co. like ‘Belimissa Holdings’ which is non existent .

The parent Co. E.M.I.T Aviation consultancy , Israel was a rejected registered Co.  On 9th June 2007 , the inspection of the U.A.V. plane test run   was carried out before Amith by the Israel Co.. To Amith these were  trifling subjects  .  Amith without further delay threw out this transaction which had already been  rejected by the Air Force.

Amith was hospitalized on 2007-06-11 suddenly and following day it was announced he was dead.   Amith was admitted to Aiklov hospital , Tel Aviv   and the cause of death was declared as Pneumonia .

According to his family  members  , Amith did not have any ailments. Never had he taken western medical treatment, and his choice was ayurveda treatment .Amith who was mentally and physically fit contracting pneumonia in Tel Aviv  was a mystery. The family members insisted on  a  post mortem examination from the SL government.

Pressures that were  exerted on Amith’s family …

However when Amith’s remains were fetched to SL what happened was an entirely different thing. The post mortem was refused and the  defense ministry pressurized the family of the deceased. An unofficial  censorship was imposed on the funeral ceremonies. Mass media coverage was restricted. A number of doctors – his contemporaries in the   class attended his funeral . Irrespective of the pneumonia  tale , their  opinion was , Amith’s death was due to some poison entering his body.

6 days after  Amith’s death , Lanka Logistics took steps to pay half the amount of the total sum  involved in the transaction  that was rejected  and  Gota violating the establishment code concluded the transaction. That was how the Blue horizon 2 pilot sans airplane system was got down from E.M.I.T Aviation consultancy after  paying US dollars 6.5 Million . The competitive price range was  much less and was  half of the price at  which  the  agreement was signed. The U .A.V  transaction was an exact carbon copy of the MiG  jet transaction . Lasantha  was murdered before the MiG jet transaction . Amith Muneendradasa was murdered after the U .A.V. transaction.

Gota used his discretionary powers  ,but  it was Amith who was the stumbling block in the weapons deal through  Lanka Logistics . Amith had rejected  many of the weapons deals which were negotiated  by Gota.  Though the commanders of the forces were serving as mere rubber seals for Gota the traitor , Amith acted fearlessly as a patriot.

At the concluding stages of the Eelam war , the land deeds given to the commanders of the forces were not in recognition of their services  ,  but  rather those were bribes. Those were bribes to silence them permanently as  they were partners  in the irregular  illegal transactions done by Lanka logistics.

There are more grounds and evidence to support that Amith was murdered. In the first half of the year 2007 , a member of  Karuna faction had the need to photograph a  house in Panadura on a particular day.

In that connection  he sought the writer’s  assistance . He  went with me to Pirivena Road , Pinwatte , Panadura and took photographs of that house. Some months later Amith passed away. When the writer went to pay the last respects to Amith’s  house he realized without any difficulty that was the house the member of Karuna’s group photographed. It became very clear therefore what was the contract that had been entrusted to Karuna’s group.

An individual like Dr. Amith Muneendradasa was a most valuable asset to the country , and deserved to be safeguarded  and  decorated. But the defense ministry on the contrary  on purpose sent vehicles of the forces without number plates to his home and exposed him . This drew heavy flak from Amith .

While the  suicide bombers were on the rampage in Colombo ,the defense ministry was trifling with his life not for nothing. If the first plan does not work by some chance , the next plan was to be implemented.  That is to silence  Amith even through a bomb attaching  a tiger label.

Dr. Amith Muneendradasa was one with an exceptional level of intelligence and a  true patriot . He was offered opportunities on several occasions to come and take over a high rung job relating to security in Israel. Once he was offered a high profile position in Tel Aviv University too.

When he was a technological advisor to  the SL government forces, he was offered santhosams  (bribes)worth millions. Lanka logistics was trailing behind him to lure him with santhosams . Amith’s answer to all those was : he learnt out of the innocent people’s funds , and his objective is therefore to repay those debts and not to amass wealth.  He always said until death that he would serve his motherland.  Gota who liquidated such an erudite valuable patriot , is now building castles in the air to come to power  through Viyath Magaval  . Nothing is more ludicrous and ridiculous than this pipe dream. .

Conspiracy of Sirisena-Gota to smuggle out murderers of late Raviraj which makes the hair to stand on end..!