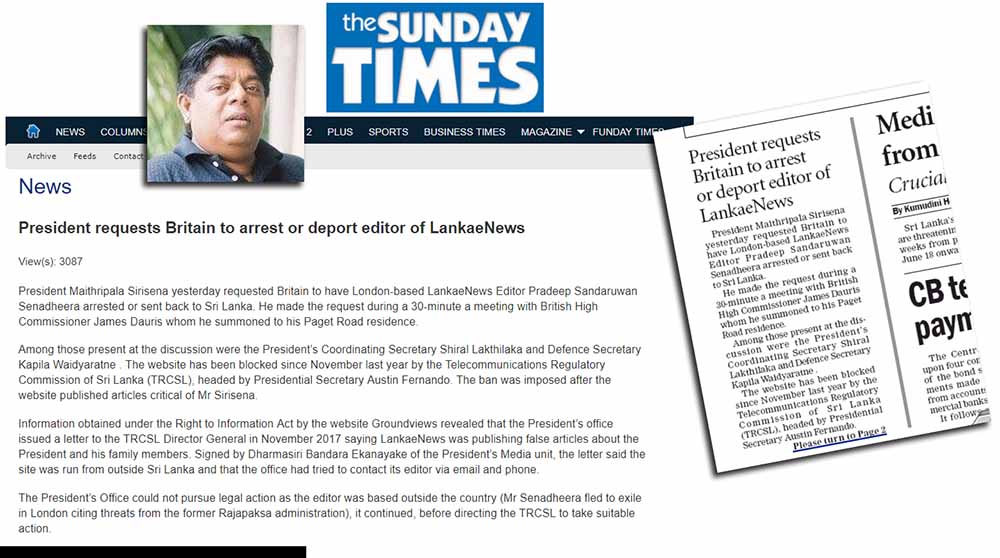 He made the request during a 30-minute a meeting with British High Commissioner James Dauris whom he summoned to his Paget Road residence.

Following  inquiries made by Lanka e News , it was learnt that the defense secretary was silent , while the president and Shiral Lakthileke were explaining  . The High Commissioner has not uttered a word , and has only recorded the statement .

However it is not known on what grounds this request to arrest or deport Lanka e news editor was made.

It is worthy of note Pallewatte Gamarala never had summoned a foreign envoy and instructed to arrest or deport  the criminals Udayanga Weeratunge  or Jaliya Wickremesinghe who are grave facing criminal charges  and hence have fled the country, and in hiding  . Neither has the president taken any action to arrest or deport V. Rudrakumaran who has formed a Tamil Eelam Trans national government and outrageously proclaimed to the world he is  its prime minister .

The desperate victims of the recent floods who are in dire straits  must be questioning the president , Waidyaratne and Shiral , why wasn’t the British High Commissioner specially summoned  to ask for flood relief aid to alleviate their sufferings ?

Might we recall  it was only after Lanka e News exposed the sordid Russian warship deal of the president , Lanka e news was proscribed  in November last year within SL even without obtaining a court order.