LeN ban not imposed by media ministry but by a ‘higher force’ - Mangala discloses ! (video) 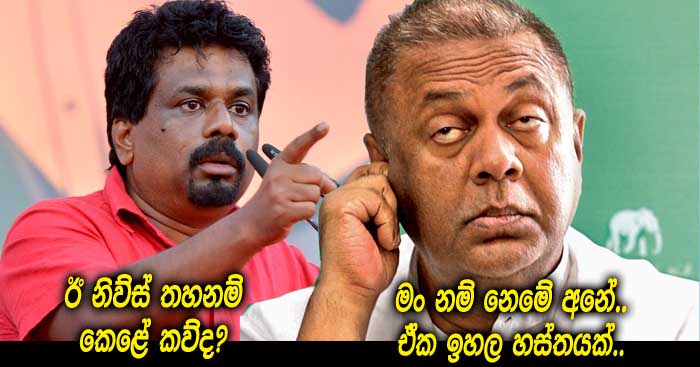 (Lanka-e-News - 13.Dec.2017, 1.05PM)  Minister of media Mangala Samaraweera revealed in Parliament on the 9 th that the media ministry has nothing to do with the ban imposed on the Lanka e news website within the country , and that a ‘higher force’ is responsible.

The minister gave the afore -stated answer in response to a lengthy question raised by the opposition chief whip and JVP leader Anura Kumara Dissanayake regarding the Lanka e news ban during the budget debate session on expenditure .

Dissanayake pointed out  , It was the present media minister who went to  courts during the Mahinda Rajapakse era against prohibition of registration of websites , and while there are opportunities  to access Lanka e news website under the minister’s era  ,  why  is the minister remaining silent now , he questioned.

It was then the  media minister revealed ‘ a higher force is in operation.’

In any event , the media minister at a conference recently  said , websites cannot be obstructed  and he is still reading the Lanka e news daily.

This higher force he referred to is  none other than the chief , around whom the barking and snarling  ‘pariah dogs’ are clustered boosted by the assumption   that an international website can be blocked,  and are self - fattening  -eating  the crumbs falling off the mouth of  this ‘higher force’ while illegally depriving the rights of over two million viewers  of the website as well as  making the UNP ministers to turn dumb. Unbelievably this  is the  ‘higher force’ that  gets panicky and maniacally rattled when he the  culprit  is warned , exposed and urged by Lanka e news to go along  the straight virtuous  path .

It is a pity, uncouth ,uncultured ,uncivilized Sillysena is  stripping nude daily and shamelessly before the forces which propelled him to power, while  falling prey to his barbaric brutes who imagine  the  internet  can be forbidden .