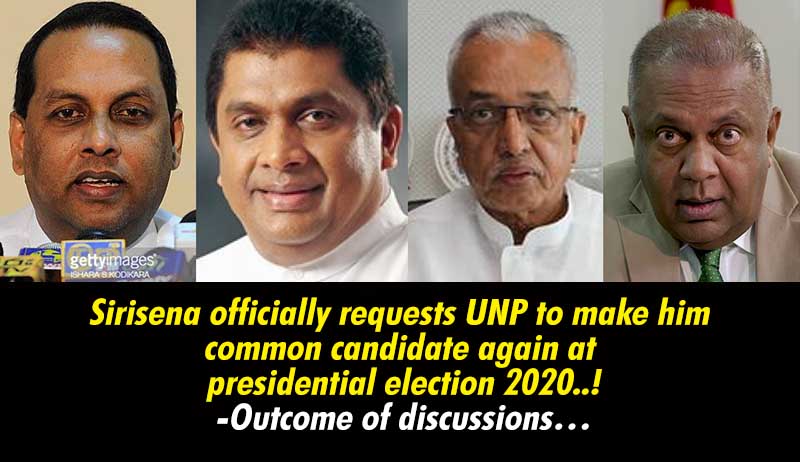 (Lanka e News -03.Oct.2018, 11.30PM) The incumbent President Palewatte Gamaralalage Maithripala Sirisena has made an official request to the UNP to extend its support to him to field as the common candidate at the 2020 presidential elections , based on reports reaching Lanka e News.

It was while the president was in New York to attend the UN general assembly , the first round of this discussion was held .The UNP representatives have clearly told, following the attacks launched by the president during the entire past on the UNP and its leadership which were responsible to put him on the pedestal of power , , he has created an environment which makes it impossible for them to go before the UNP members and explain this.

The two UNP representatives who did not accept their view had said, if a presidential election is to be held without the 20 th amendment being implemented , definitely the UNP will be fielding a UNP candidate.

The discussion ended without any decision being taken , and a date for another discussion had also not been fixed.

It is a strange quirk of fate , Mangala Samaraweera who moved heaven and earth to promote Sirisena as the common presidential candidate at the last elections is now compelled to reject him as presidential candidate at the next election. Moreover , Sirisena could choose as his representatives for this discussion only two individuals who worked openly and left no stone unturned to defeat Sirisena at the last elections. It is also a pity the incumbent president is in such a dire and hopeless situation that he was unable to enlist even Duminda Dissanayake who worked for him with heart and soul at the last election to represent him at the recent discussion. It is hoped at least now the president will realize he is the architect of his own misfortune.

Sources close to the president disclosed , after learning of the UNP view , president Pallewatte Gamaralalage Maithripala Yapa Sirisena following his return from New York is determined to employ his full force to launch attacks on the P.M. while having also decided to somehow win over Flower Bud leader Basil Rajapakse to his side through the Gotabaya group by exerting pressures.

The president has told with his own mouth ‘I shall not allow UNP to win , and I shall bulldoze Ranil.’

The masses are anxious to learn how a double tongued double faced leader who is precariously clinging on to a meager 4 % vote base is going to bull doze a leader who has a 35% to 40 % minimum vote base.