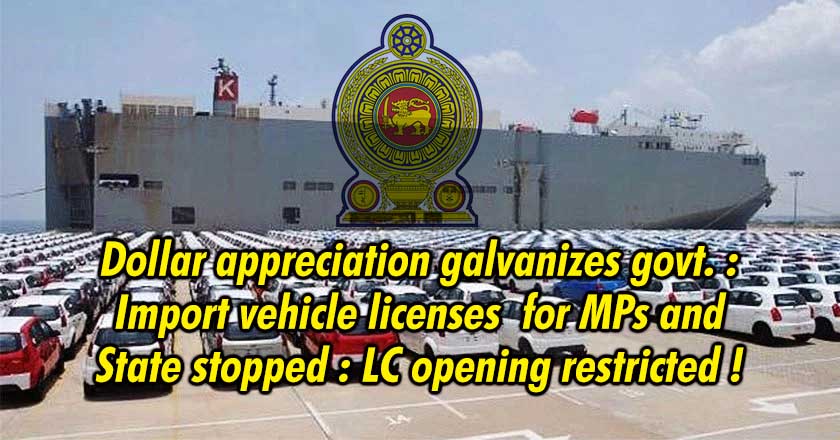 (Lanka e News -30.Sep.2018, 10.30PM) With the view to cushion  the adverse effects of the depreciation of the Sri Lankan rupee vis a vis the appreciation of the US dollar   , the government  decided to introduce restrictions on imports temporarily with effect from 2018-09-29 midnight . The communique issued by the finance and mass media ministry in this connection is hereunder …

It is to be noted not only SL , several other  countries too are affected by  this crisis .

Importation of vehicles for Government Ministries, Departments, Statutory Boards, State own Enterprises will be suspended until further notice.

Importation of vehicle using the concessionary permits issued to entitled State Sector employees will be suspended for six months. No Letters of Credits will be permitted to be opened based on these permits during this period.

Importers of all vehicles other than buses, lorries and ambulances will have to keep a 200 percent cash margin at the time of opening of the LCs

Further, the requirement of 100 percent cash margin has been imposed for the import of Refrigerators, Air Conditioners, Televisions, Perfumes, Telephones including Mobile phones, washing machines, footwear and tyres

However, though these measures will be effective  temporarily from Saturday 29, 2018. the government will continuously monitor the exchange rate fluctuations and will take appropriate action accordingly