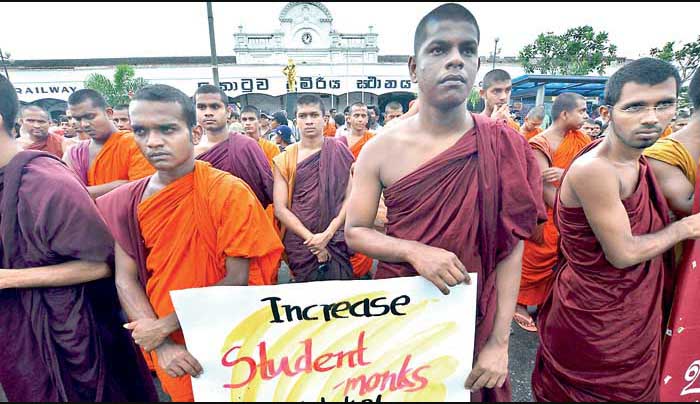 (Lanka e News – 20.July.2018, 11.45PM)  It is now a well and widely known fact that day in and day out   there are  news reports about the rascally  rowdy activities  of robed monks which include hooliganism , sodomy and sacrilegious activities despite wearing the sacred saffron robe.   Owing to this  the entire country , Buddhism the religion they are supposedly following and even the clergy order are being disgraced and degraded on a scale never before witnessed in the country  . The latest incident in the series involves a 26 years old fresher student monk who was made a victim of brutal ragging by five senior student monks of Ruhunu University . The fresher had been stripped nude by these senior monks inside their hostel  and subjected to brutal torture and torment under the pretext of ragging.

The five monks arrested were remanded until the 30 th  after they were produced before Matara magistrate  Ms. Pavithra Sanjeewani Pathirane . The magistrate issued the remand  order today (19) .

The victim who faced brutal harassment  due to ragging was admitted to the University’ s social science and humanities faculty for extra protection on the 9 th after the period of ragging was over  . It is on the same night  the fresher monk had been tortured and tormented most ruthlessly by these 5 beasts in robes.

The police informed court that the ragging had been done within the bathroom of the monks’ hostel  by these five accused monks after stripping the fresher monk nude .

Although the police  advised that the victim  who complained to get  admitted to the Matara general hospital for a medical examination , he had said he will not come again to pursue his studies at Ruhunu University , and gone back to the Vihara to which he is attached.