By a former Intelligence officer of the forces 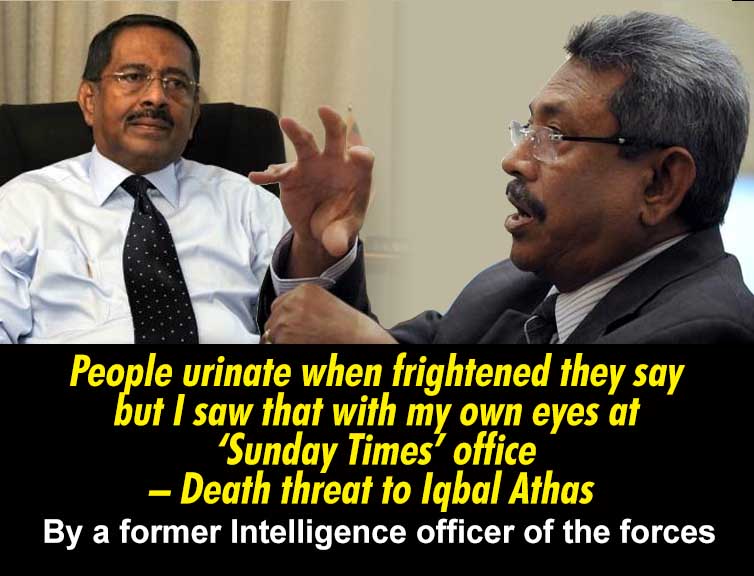 (Lanka e News -03.June.2018, 11.45PM) In order to pay the debts incurred owing to 1965 elections the name of late D.A. Rajapakse was sold. On another occasion , the ancestral abode- Medamulana house had to be leased out.

As Medamulana house could not be saved after the leasing out, the Rajapakse family was evicted by the Fiscal. It was a close pal of D.A. who came to the rescue of the destitute and desperate Rajapakse family at that time . He paid the arrears   and got the house released for Rajapakses.

When he died nine children were left in the lurch within  Medamulana house. With the sudden demise of D.A. ,Mahinda’s family faced acute financial hardships .Mahinda based on his GCE O/L results secured a job as an assist. Librarian at Vidyodaya library.  His  monthly salary was Rs. 201.00 and managed to get this job  based on  political connections.

When Late Mrs. Sirimavo arrived at Medamulana for D.A. ‘s three month dhana  the future political destiny of Rajapakses was discussed. Following the dissolution of parliament in view of 1970 general elections , Sirimavo offered an opportunity to Mahinda to contest Beliatta electorate.

Mahinda obtained a disaster loan from Vidyodaya University to spend for elections. Mahinda’s loan amount was  equal to his  one  year ’s total  salary, and with that he went into action as Beliatte  candidate . Mahinda who won was appointed as a member of parliament. All this information  are contained  in Mahinda’s “Kurahan satakaya “ story book.

Though Mahinda disdainfully calls Sirisena as a grama sevakaya , it is to be noted Mahinda began his career from a worse position than that . That is as an assist. Librarian.

Gotabaya joined the forces as a Cadet officer not based on his merits but because   Medamulana clan was begging before the officers of Sirimavo. Gotabaya has barely passed the GCE O/L. His performance and poor marks he obtained during the Cadet course  are testimony to his incapability.

After passing out he was assigned to the ‘Rajarata Rifle force’

Gotabaya who fled the country in fear of the war to America lived a most poverty stricken  life . His favorite occupation was cringing and crawling before  his benefactors. He bought a wine bottle priced at US $ 2.00 only once a month.  During the 15 years he spent in  the U.S. he never visited his motherland , let alone thought  of it. If he ever took a phone call to Sri Lanka  , that was once in a blue moon. All those drawbacks were because of his dire impecunious state .

It is thereafter he began gobbling in billions..

Prior to elder brother becoming the president and Gotabaya being appointed as defense secretary , decisions regarding purchase of weapons was made by the forces. Even the special unit that was launched for transactions pertaining to arms was within the forces.

Sri Lankans who had language literacy in Russian , Chinese. Latin, Israel languages were assigned as  authorized officers to this special unit. Corruption if any , was not that much before Gota ‘s time.

The robbery  was in hundreds of thousand rupees  and confined to one section  only. No sooner Gota came in , than he did away with the discretion of the officers in regard to weapon deals and dismantled the service of language translators . Gota who brought everything under his discretion  and made decisions unilaterally began his favorite pastime - robbing in billions.

In 2006,  he collected a sum equivalent to U$ $ 17.8 million (approximately) in installments  from the general treasury to purchase 4 MiG jets and   3 planes . But to the Ukraine Co. which supplied them he paid only US dollars 7.2 Million.

While pretending it is a G to G  transaction( between two states) Gota made payment to Belimissa Holdings in London ( another spurious Co. of Ukraine Co) after deceiving the cabinet  and parliament  . So far no one had been able to  search and find that Co. Therefore Gota had planned it and gobbled nearly US dollars 10 million.  These have all come to light by now with cogent and copious evidence. All what  needs to be done now is hearing the case .

How Iqbal  Athas was subjected to  murder threats…

As a rule the only dream of the second in command of the forces is to somehow become the chief by hook or by crook. It was a common   practice at  that time to pass the files which can militate against the chief , by the second in command of the forces to Iqbal Athas who wrote the defense column in Times newspaper . The changes that were  effected to positions in the forces was the outcome  of Athas’ situation report from Colombo.

When Gota ‘s MiG Jet deal was put through , Harsha Abeywickrema was the second in command of the Air Force.  He was a very close pal of Ranil.  Hence it can be gauged how the original files of the MiG jet robbery went into the hands of Athas.

With the exposure of Gota’s MiG jet robbery by Athas , Gota was most panic stricken and guilt ridden. W.G. Gunaratne of Lankadeepa newspaper was the one who wrote Athas’ articles in Sinhala. Gota’s colossal theft and treason became the hot topic of discussion  even in the rows of  shops and  boutiques in the villages .When Siripathy and Mangala also questioned this in parliament Gota’ s position became most precarious , and he was most ruffled. Weerawansa who is today washing the stinking  ‘lankot’  after  sniffing it of Gota was then with his JVP bosom pals.  The only saviors for Gota were  Henda ‘s National intelligence division and the white Van abductors.

By then 14 media personnel had been murdered.

Even by that time 14 media personnel including Tamilnet Sivaram , Sudar Oli Sugeetharajan , Sampath Lakmal of Sun dina  had been murdered, and for several others the net has been thrown to trap them. Victor Ivan too was in the hit list. The contract to silence Athas  was entrusted to the writer.

Accordingly the writer visited the Sunday Times office . On the day the writer went to meet Athas , Sarana Gunawardena a relative of Rajapakses  and chairman of Lotteries Board  has organized  a demonstration in front of Athas’ residence against him. They were furiously berating him as a pro Tiger supporter .

The writer who visited Athas’ office first met W. G. Gunaratne , the writer in Sinhala of Athas’ articles. He was told to immediately stop the exposure of the MiG jet  deal which was  undermining the self confidence of the forces.

Gunaratne’s answer was , ‘I am just an employee in this newspaper office. Shouldn’t I do what the establishment says ?….’

As soon as he said that , the writer turned towards  him and  sound of a weapon ‘ cocking’ within the bag of the writer was heard. With that what followed was gloom and Gunaratne was profusely sweating. It is said an individual who is extremely frightened urinates . That was witnessed with the own  eyes at Sunday Times office.

Gunaratne  then  promised none will write a word about the MiG jet deal. The writer after reminding him of the fate that befell  Raviraj who did not heed such  a warning issued to him , left the Sunday Times office.

Within a few hours , owing to this incident the Colombo High Commission office was in a mournful state .At the same time bitter criticisms were mounted against the government over the media suppression  and oppression Mahinda who threw a party for Lakadeepa editor Siri Ranasinghe to curry favor ,slyly and silently got the CCTV recording deleted. The investigation into the murder threat also halted in the tracks. Since that day neither in the Sunday Times nor in the Lankadeepa  , the MiG jet deal was reported- not a word was written . However , Lasantha began his writing from the point Athas stopped.

By a former Intelligence division officer

Next : The murder of Amith Muneendradasa  Technological advisor  for  procurement of weapons for the three forces.

Conspiracy of Sirisena-Gota to smuggle out murderers of late Raviraj which makes the hair to stand on end..!