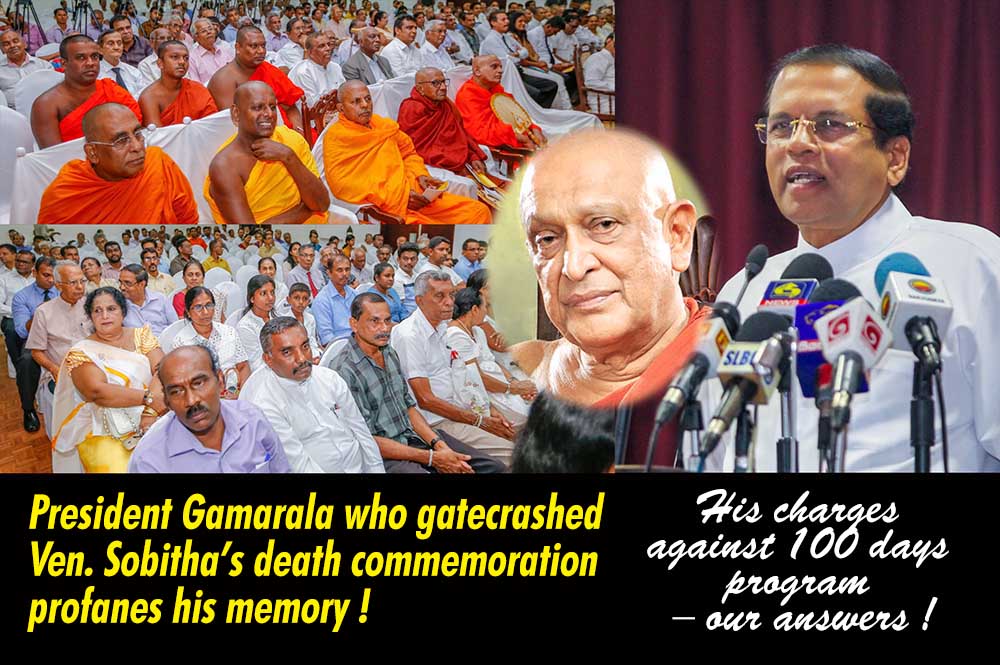 (Lanka-e-News- 01.June.2018, 11.30PM)  President Pallewatte Gamarala the epitome of ingratitude who bites the hand that fed and  kicks the ladder that elevated  him to the top , gate -crashing the death commemoration ceremony  of most Ven Sobitha Thera the chief organizer of the  movement  for just society , conducted himself most villainously and self degradingly.

On that occasion as though to deliberately desecrate  the solemn ceremony ,  he mounted the stage and criticized  the 100 days program  which was initiated by  the Late Ven .Thera   with the latter playing   a key   role .   Moreover it is an incontrovertible  fact Ven. Sobitha Thera was most contributory to  Gamarala’s presidential  victory .

‘In the 100 days  program  report , dissolution of parliament was not there. I do not know who prepared it. Looking at Jayampathy Wickremeratne ( president pointing  at him who was in the audience ) , it was the  most foolish thing that  was done. What should have been done if they had the brain was , dissolved parliament on the very night of the day I took oaths as the president’ Gamarala told in a fit of rage.

Gatecrashing and profaning the dead

Even a street urchin  who knows even little decency and  etiquette  wouldn’t disrespect the dead in the way Gamarala did on this solemn occasion. Not enough entering the venue as an intruder , he even went on to publicly castigate the program of late Ven . Sobitha Thera who is long dead  , and mind you , that too at  the death anniversary of that  most revered and venerated Buddhist prelate who made a major contribution to put  Gamarala on the presidential pedestal.

A  monk who attended the function said , because the  president accepted the SLFP chairman post , the good governance turned turtle . Gamarala who was infuriated by this exposure , said indirectly in his speech that he UNP headed by Ranil Wickremesinghe which was responsible for that. Gamarala ‘s latest hobby horse – the 19 th amendment  was the other topic he harped on . He reiterated with Peacock pride , it is because he took over the SLFP chairman post , the 19 th amendment could be passed.

Poor Gamarala like at the last local body elections when he tried to fasten the entire blame on the UNP of the consensual government , and clear himself of his guilt , on this occasion too he tried the same ploy . Gamarala was most rattled and distressed because that same morning the corrupt tender bid valuing Rs. 22 billion   for the supply of food to the forces he sought to push through  failed.  Because Lanka e News exposed every detail of his corrupt tender bid to the people which Gamarala sought to steer through via  a cabinet paper on the 22 nd  , Gamarala  could not achieve his foul traitorous aim and agenda.

His charges against 100 days program – our answers !

As a media Institution that supported the 100 days program , we deem it is our duty  to  furnish answers to the criticisms leveled against it by president Gamarala  …

Firstly, let us remind him the 100 days program was not originated by a single individual , single party or single organization. It was the outcome of the support of  the organizations , parties and  media which were against the Rajapakse regime then.

The only common theme that could bring all together was abolition of the Executive presidency. During discussions the theme was to  abolish this within 6 months. But the UNP said , that can be done within 100 days, and within that period , even a referendum if necessary can be held. On the 0ther hand , if the majority of the pro Rajapkses are not extending support  towards this , then there was a method too to dissolve parliament and go for elections. Pallewatte who had no truck with the opposition campaign then may not have known  this. However at the last moment  when he  joined  he accepted those without  questioning  anything.

Leaving alone  the fact that Pallewatte Gamarala  came   to power flaunting  the 100 days program  , the same Gamarala saying today , he does not know who prepared that and it is a stupid program after swearing earlier on before the people solemnly wherever he went that he would implement it is not a matter for surprise  knowing very well his uncouth , uncultured , uncivilized ,ungrateful and unscrupulous overriding traits.

It is certain going by his  inborn evil traits ,  only if Gamarala’s mother had not died as he was born , he would have been the first to eat the umbilical cord of the mother who helped him to come to this world. May be it is after  realizing  that she had given birth to a serpent in  human form when  he was born that  she died of shock. In any case may her soul rest in peace. .

It is only today Gamarala realized if the common candidate had become the president , talking about the constitutional amendment was foolish without dissolving the parliament that was with a ‘minority’ of 47 members while the pro Rajapkses were  in the majority , though to the  intelligentsia of the political arena that was  the    most crucial .

Has he  forgotten  how he waited until he could rise with Mahinda ?

It is none other than Gamarala who took over the role of SLFP chairman and  impeded the program designed to abolish the executive presidency via  the 19 th amendment . People are not that stupid to listen to  his  Gamarala  baila or believe the  fairy tales he is relating today  after having conveniently forgotten   what he told , promised and  did  three years ago.

It was Gamarala and no other after getting together with Rathane Thera and Champika Ranawake who is always a  thorn  when it relates to  every national issue , and then showing  an agreement signed with them tried to create a public opinion what must be abolished is not the executive presidency but only the deleterious  aspects of the executive power .

Unbelievably it was Gamarala himself who diluted the 19 th amendment to suit his own ends. Can anybody  forget how he used the SLFP of which he became the chairman and the UPFA to achieve that purpose?

What did Gamarala  do then who is now saying it was folly that the parliament was not dissolved the day following  his taking oaths, and blaming others   ?

If Gamarala does not remember the requests made several times in writing to him to dissolve parliament without postponing by  Ven . Sobitha Thera whose death  anniversary fell on 30 th May ,it is best if Gamarala reads the newspapers of May and June  2015 .

What did he say about dissolution of parliament during local body elections ?

There are two things that should be highlighted  to the president who is blaming others including the UNP that  prepared the 100 days program, and  without dissolving the parliament the day following Gamarala taking oaths as president : If he is one who has some amount of political vision and  if he is not among those who prepared the 100 days program, why is that he did not dissolve parliament ?

Is the power to dissolve parliament vested in the prime minister and not president ? or vested in Ven. Sobitha Thera  or in Jayampathy  Wickremeratne  at whom the finger was pointed  today ?

Didn’t this skunk  from the dark side of the Moon tell an entirely and  diametrically different story to the SLFP ers and the UPFA ers from what he is telling now , during the local body elections?  Didn’t he say if he dissolved parliament the day following his taking oaths the SLFP would have been  finished , and therefore in order not to allow room for the UNP to form a separate government , he  postponed the dissolution and delayed the elections with a view to confer an advantage on the SLFP ? Didn’t Gamarala tell all this to pose off as a hero among the SLFP members ?  Now , what is he blabbering then today ?

Gamarala on the day following his becoming president met with the Rajapakses at the residence of Mahinda Amaraweera to promise nothing harmful will be done to them . Some days later he  also had secret  discussions  with Gotabaya at former’s Paget road residence after extinguishing the lights. What has he to say about the cogent evidence in  this regard in the book written by Malith Jayatileke   a  national list M.P. of Gamarala himself  ?

Gamarala who swore day in and day out  that he  would abolish the executive presidency which was the cherished aim and primary  goal of Ven Sobitha Thera , however when he arrived at his commemoration ceremony did not at least say he would  support the proposed 20 th amendment . It is very rare such a scoundrel of the lowliest level gets an opportunity to become  a ruler of the country . Such rascals being tolerated by the ruled is even rarer. It is because some  curse that has befallen us and the country that we have to put up with such a double tongued stinking spittoon of a mouth president since 2015-01-08 .

This stupid moron who chose the commemoration venue of late Ven . Sobitha Thera to give answers to the statement made by Chandrika that not only Gamarala , even any other common candidate  would have won the presidential election that time , spoke like a Kindergarten class child who is piqued and peeved. His replied to her statement by questioning  ‘ if so , then could have put somebody else  and won. Why wasn’t that done?’ Can such an idiot be addressed as a president ?

This same buffoon spoke about the granting of helicopter then to defeated Mahinda Rajapakse without naming the prime minister whom he tried to blame.  We however do not see giving Mahinda helicopter transport at that time with a view to release the reins of power  peacefully as an issue because Ranil did not load Mahinda’s helicopter with  pro good governance crowd.  On the contrary what did  this two legged mutt do throughout the last local body elections ? Didn’t this mutt until the end of elections along with Mahinda’s Lotus Bud crooks travel by helicopter to canvass  for votes? Wasn’t that   to cling on to the cursed shawl of Rajapakses ? Can there be a worse show of self degrading conduct than that ?

Pallewatte Gamarala who like a typical mutt bit and ate the hands of all those forces all this while which propelled him to power spared only the name of Ven . Sobitha Thera, but  today he  finished  him too.  Before this he finished biting and eating the hands of all those who fed him . Those victims were Lanka  e News , Civil Organizations ,Chandrika Kumaratunge , Ranil Wickremesinghe, Sarath Fonseka ,  and his closest   Rajitha Senaratne

The UNP shall  give the answers to the charges mounted that it  did not implement the laws. In like manner the Daily Mirror newspaper too shall answer the charges leveled against it.  We of course gave answers by exposing the absolute falsehoods uttered by Gamarala with regard to the 100 days program which was launched with our backing. Even others who were associated with that program shall furnish answers to this stinking skunk of a rare specie with rare abilities to change into a serpent , fox , mutt , swine or chameleon instantly and with consummate ease.

In any event , even as Gamarala is trying to paint a picture that he is clean and pure we are deluged with copious information and details about a most unlawful disgraceful act of his exerting unlawful pressures . We shall expose  those lurid details in another report .

The video footage of the most despicable , detestable and self degrading speech of president Gamarala at Ven. Sobotha Thera’s death commemoration is hereunder